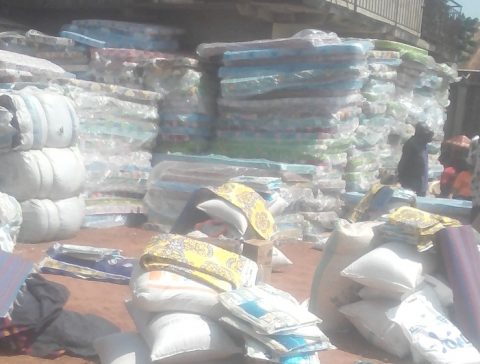 Our Correspondent reports that the violent disaster which ravaged both residential and commercial buildings in parts of the Community, occurred on 23rd April 2018.

Speaking during the formal presentation and flag off of the direct distribution to the affected person held in the community, Director General (G-G) of NEMA, Egr. Mustapha Maihaja, who sympartised with them, said the federal government gesture was aimed at cushioning the effect of the natural disaster

He said: “the violent windstorm that ravaged Agbogugu community, Awgu local government Area ofEnugu state on the 23rd of April , 2018 was brought to the attention of NEMA through wide spread media reports, Enugu state Emergency management Agency (ESEMA) and phone calls from other well-meaning sons of the land.

Maihaja, who was represented at the event by the South- East zonal Coordinator of NEMA, Mr. Walson Brandon, disclosed that the agency had earlier carried out a joint assessment to ascertain the level of the disaster in the affected area, on 25th, April 2018.

He added that the team that went for the assessment assignment were made up of its staff from the South east zonal office, SEMA, alongside a  member of the federal House Representatives, Hon. Toby Okechukwu , who represents the affected community in the lower chamber of the nation’s National Assembly NASS.

According to the NEMA boss, “the assessment conducted, revealed that several buildings both residential and commercial had their roof blown off, economic trees, were pulled down, leading to displacement of residents and dislocation of means of livelihood.

He stated the assessment, equally revealed that most of the affected persons do not have the capacity to rebuild their houses or restart their businesses” thus the submission made to our headquarters for assistance to the affected persons is the course for our gathering here today.

“The responsiveness of the federal government on the plight of disaster victims has been quite prompt and encouraging, we receive approval of relief items in accordance with our mandate and have thus delivered them to the affected communities.

The DG stressed thus” please, the note that the relief materials brought to you today is not to replace what you lost during the violent windstorm, but to cushion the effect of the unfortunate incident” he stated.

He however, advised people of the community to embrace tree planting around their homes and commercial buildings that would act as wind breakers, just as he asked them to cut down huge tress near residential buildings that have become risks to the people.

In their separate remarks, President General of the community, Hon. Simon Chijioke Udeh, and traditional rulers from the four autonomous communities of the locality, had expressed appreciation to the federal government for the intervention, saying the gesture has whipped away the tears of the victims.