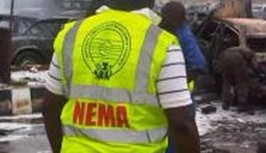 The Disaster, which occurred early this year, rendered several families homeless in the Community.

Handing over the items to the Enugu State Government for onward transmission to the victims, NEMA advised residents of the community to cut down risky huge trees near residential buildings to save lives.

Speaking during the presentation, South East Zonal Director of NEMA, Major James Eze, said the gesture was aimed at ameliorating the sufferings of the victims.

Eze, who represented the NEMA, Director- General, Alhaji Mohammad Sani Sidi, also urged residents of the area to plant Shrubs near houses, adding that the practice would reduce the effects of violent winds and also act as a disaster risk reduction scheme.

The NEMA boss, averred that when the violent wind storm was brought to the attention of NEMA by the Enugu State Emergency Management Agency (ENSEMA) on March 27, 2015, a joint assessment team of NEMA and ENSEMA swiftly visited the community to assess the extent of damage to lives/property.

The assessment conducted, he continued, revealed that several buildings (both residential and commercial) had their roofs blown off.

“Trees were pulled down leading to displacement of residents and dislocation of means of livelihood. Regrettably, the affected persons do not have the capacity to rebuild their houses or restart their businesses. The FG response to the plight of disaster victims has been quite prompt and encouraging.

“We advise that Akukwe residents should plant trees to ring the community that would act as wind breakers. Huge trees near buildings that have become risks should be cut to save lives and property”, he said.