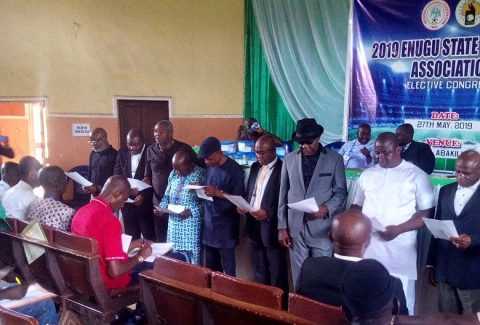 (AFRICAN EXAMINER) – A board member of Nigeria’s football governing body, the Nigeria Football Federation NFF, Hon. Chidi Offor-Okenwa was on Monday re- elected as the Chairman of Enugu State Football Association (ENSFA), for another 4 year tenure.

The seasoned soccer administrator and his Vice, were elected unopposed alongside eight other members during the association’s 2019 elective congress, held in Enugu.

Our correspondent who covered the election reports that the exercise which was witnessed by a representative of the (NFF), Mr. Joshua Onoja, as well as Enugu state Ministry of Youth and sports, among other soccer stakeholders, was very peaceful.

Earlier before the commencement of the exercise, the (NFF) representative, had said,” Today is a special day; a day the Enugu State FA house will determine their fate for some years ahead.

”I believe that the electoral committee has done a good job and l hope to see a free and fair election.
”It is my utmost belief that you will make a good choice, so that the Enugu State football house will grow,” he said.

Administering oath of office on the new executive members immediately after the poll, Secretary of Rangers Inter. FC, Barrister Ferdinand Ugwuarua, expressed satisfaction with the matured and civilised manner the Congress members conducted themselves during the exercise.

He said: “I wish that Nigeria elections will always be free and fair like this very election. I wish the elected officer well and urge them to work for the good of the game and for humanity,’’

In his acceptance speech, the newly elected chairman, Okenwa, expressed appreciation to the delegates for the confidence reposed on him and his executive committee members, assuring them that the association under his watch, will not fail them.

The ENSFA boss, had equally thanked the Enugu state governor, Ifeanyi Ugwuanyi, for creating enabling environment for the association to operate in the state, adding that he is great full to all that had been involved in the day-to-day running of sports, especially football in the state.

Offor said: “Thank you for the new order and enabling environment you have brought into Enugu State FA which made it a conducive place for me to work. We are going to take football in Enugu State to next level, and the much we could not do these past years, we are going to do it this time around” he assured.

According to him, “Enugu State sports is a moving train and we will paddle it in a positive way, which has been our desire. It is worthy to note that we have done it before and together shall do it again,”

Chairman of the electoral committee, Mr.  Ndubiusi Asogwa said that the elected members satisfied the organisation’s election guidelines, saying
“Having certified the Enugu State election guidelines for 2019, the chairman and other members hereby stand elected as the executive officers.

The event was witnessed by Sports writers, and other stake holders in sports promotion and development in the state, including ENSFA Secretary General, Mr. Francis Ugwu, among others.