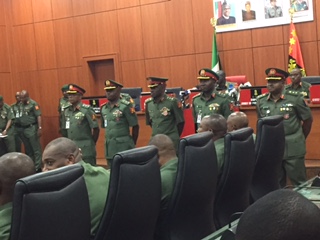 The decorated generals comprising one major general and 22 brigadier generals.

While congratulating the newly decorated generals, Buratai urged them to remain responsive in the discharge of their constitutional duties.

He said that the new ranks had placed the officers in position to take higher responsibilities, adding that they must be responsive to their troops as well as the training needs of their units.