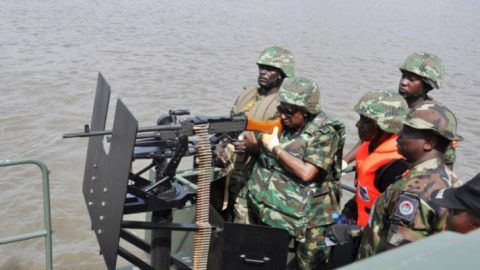 The operation was aim at checking activities of miscreants in the region during the Christmas and new year celebrations.

Deputy Director, Army Public Relations DDAPR of the 82 Division, Nigerian Army Col. Sagir Musa, who disclosed this in a statement on Tuesday said troops would continue to maintain road blocks and check points.

He noted that the General officer Commanding 82 Division “GOC was also at the Onitsha-Niger Bridge to assess the state of security and vehicular movements.”

According to him, “It would be recalled that traffic gridlock has for many years, especially during the yuletide, been endemic on the Niger Bridge in both Asaba and Onitsha axis inflicting suffering and other inconveniences to the road users.

“Hence, parts of the targets for the exercise is to checkmate the usual gridlock, chaos and insecurity at the bridge.

“This objective has so far been achieved. Since the start of Exercise Python Dance, there have not been cases of gridlock and associated insecurity on the Asaba-Onitsha bridge.

“The orderliness, the disposition of combined security personnel and the public conduct, especially the road users, is commendable.” Musa said.