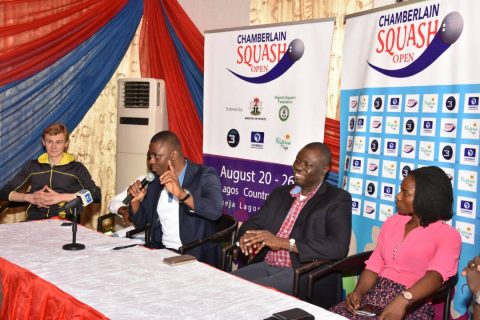 LAGOS, NIGERIA (AFRICAN EXAMINER) – Governments at the various levels and sport enthusiasts in Nigeria have been tasked to give more attention to Squash and increase the investment on it, as done to the Football, so as to discover new talents as well as raise the bar of sports development in the country.

The newly-elected President of the Nigeria Squash Federation (NSF), Mr. Boye Oyerinde handed down the task Friday while speaking to journalists at the Press Conference to kick-start the maiden edition of Chamberlain Squash Open (CSO) in Ikeja, the State Lagos capital.

Mr. Oyerinde who lamented that authorities in Nigeria have neglected Squash for other sports, offered that there was no other way out of the present challenge in the sport (Squash) than for the Government to accord it due attention, in order to bring it to the front burner.

NSF boss stressed that just like the Football, Squash has the prospect to develop many young talents; with the capacity to advance it to the advantage of the country.

He therefore called for due attention and investments on the human resource, structures and facilities that would reposition the game; make it more visible; attractive and attainable to every prospective player.

Oyerinde disagreed with the position that Squash is only for the rich, as he argued that there are many known Squash stars who did not necessarily come from the wealthy background.

Still, he admitted that affordability of the basic equipment, for instance, racket might in some instances, be difficult to attain as a pair of the cheapest, costs not less than N100,000.

Addressing newsmen at the Conference, the CSO Promoter and ace broadcaster Chamberlain Usoh pointed out that the body’s vision was to promote and develop the sport amongst the youth as well as bring up a new generation of players that would represent the country at the National and International levels.

Similarly, the initiative, Usoh stated was aim at contributing the CSO’s quota to the development of the sport ”through systematic promotion at the grassroots, national and international levels”.

”We at CSO aim to foster cohesion, enhance health fitness and promote friendship within the squash community” Usoh restated.

The broadcaster affirmed that CSO also had the vision to ”hoist Nigeria’s flag on the international sporting arena”, adding that the firm was determined to see more Nigerian Squash Players get ranked in the Professional Squash Association (PSA) global ranking, within the shortest possible time.

Usoh who also plays Squash added that CSO seeks to ”identify, harvest and harness raw talents and equally cultivate a robust competitive spirit amongst the players irrespective of age or gender”.

While speaking with the AFRICAN EXAMINER, Usoh stressed that if Egypt after taking after Pakistan, her present exalted position in Africa, nothing should stop Nigeria from achieving similar feat, giving the available talents in the country and zeal in them to thrive against many odds.

Usoh asserted that he was not worried about any factor that might impede the vision and drive at any point, yet, stressed that challenges itself were not the real issue, rather, how the driver of a dream faces or tackles the obstacles.

The one-week tournament, according to the CSO Promoter would provide the squash community, the opportunity to appreciate the power of sports, especially in the area of bringing people together and cementing the blocks of unity, regardless of their ethnic, social and political affiliations but in the ”true spirit of social responsibility”.

Usoh confirmed that a total of 89 professional players comprising men, women, local and foreign players were duly registered for the competition, which will hold on the Country Club Squash Courts, Ikeja.

As he reiterated that the tournament would also provide a platform for all players to learn from each other; share ideas and build lasting relationships, the Promoter urged the contestants to take full advantage of the game and use it to develop their skills, both on and off the field.

From the registered number, 56 (main and qualified draw), out of which are 28 males and 28 females are contesting.

Among the contestants at the Open is the Nigeria number 2 Squash Player and the winner of the recently concluded Zimbabwe Squash Open, Sodiq Taiwo; the English PSA player and the world number 165, Tom Ford among many others.

Usoh announced that the total cash prize to be won by (male and female) in the tournament is $12,000.

The final of the competition which is slated between Sunday, August 20 and Saturday, 26, 2017, will be preceded by exhibition and feature some Nollywood stars among whom are Ramsey Noah, Desmond Elliot among others.