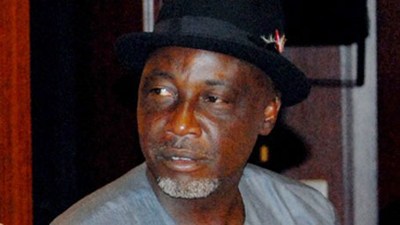 A Federal High Court sitting in Abuja has ordered former Minister of Interior, Mr. Abba Moro to be remanded in prison till ruling on his bail application.
Moro is being prosecuted by the Economic and Financial Crimes Commission (EFCC) on 11 count charge, including alleged N675m fraud on the aborted March 15, 2014 National Immigration Services (NIS) recruitment exercise.
Also to be remanded pending the ruling on bail application scheduled for Wednesday, March 2, 2016, with the ex-Minister is a Deputy Director in the Interior Ministry, Mrs. F. O Alayebam‎i.

However, Justice Anwuli Chikere Monday allowed another suspect and former Permanent Secretary in the Ministry, Mrs. Anastasia Daniel-Nwobia‎, to continue to enjoy an administrative bail granted her‎ by the EFCC on February 22, 2016.

Arraigned with Moro by the EFCC were Daniel-Nwobia and Alayebami‎ as well as a private firm, Drexel Tech Nigeria Ltd, engaged with the recruitment exercise.

The suspects, except the company, through their lawyers, pleaded not guilty to the 11 counts charge preferred against them by the EFCC.

The accused were charged with the offences, including obtaining money by false pretense, procurement fraud and money laundering. They were alleged to have defrauded 676,675

applicants charged to pay N1,000 each, estimated at N675 Million.

The action according to the plaintiff is contrary to sections 40, 42 and 43 of the Public Procurement Act, No. 65 of 2007 and punishable under section 58 of the same Act.

‎Consequently, a leading prosecuting counsel, Mr. Aliyu Yusuf, applied that the accused persons be remanded in prison and subsequently prayed the court to announce the trial dates.

However, counsel to the second defendant Alayebami, Chief Chris Uche (SAN), informed the court about bail application he had filed on behalf of his client, stating that she is a nursing mother as well as “a victim of circumstances”.

The application prayer was granted, hence the ruling was adjourned till Wednesday.