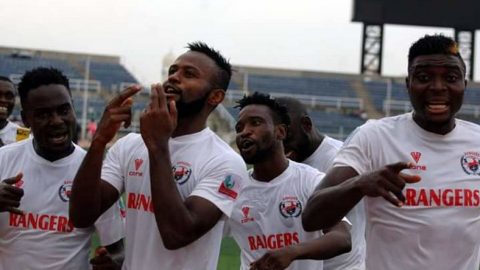 With the victory, the Enugu club side, which recently crashed out of the 2018/2019 Confederation of African Football (CAF) competition, now occupies the 3rd position on the table log with 15 points from six matches, and has recorded  five home matches unbeaten.

African Examiner sports reports that Visiting Remo players, opened scoring in the 7th Minutes  into the first half of the match when Bright Akpojuwewo kissed the Rangers net from a corner kick.

Rangers Ifeanyi George restored parity for the home team in the 34th minute before utility striker, Godwin Aguda secord the 2nd goal at exactly 44th minute via a  penalty shootout, after Remo defender committed a foul in the box.

Aguda made it 3-1 for Rangers in the  49th minute as a result of the visitors defensive blunder, while and Ajani Ibrahim increased the tally to 4-1 in the 61st minute.

Chidera Ezeh gave Remo a lifeline of coming back in to the game when he nodded into his own net in the 83rd Minute, incurring an own goal for the Flying Antelopes.

In Rangers quest to stop the visitors from coming back, Micheal Uchebo registered his name on the score sheet  when he dribbled past two defenders to slot into the right hand corner of the post to peg the host team goals to 5-2.

Speaking to Sports writers during the post match media briefing, Rangers Chief Coach, Olugbenga Ogunbote said he was excited with the result, adding that their intent to win the match was what saw them through.

He added that “even when we consider early in the match, we never think of losing because we always believed in 90 minutes of action.

According to him, “The visitor early goal brought out the best in us and knowing fully what is means to win at home.

“Rangers cannot slip up at home because that is where we need to make up points and we want to utilize our chances at home. We are growing in scoring and today we scored six goals as we put five past the visitors and one into our net.

‘The Rangers gaffer noted that the scoreline showed that they have  started getting the needed goals and wish it continues even at away matches because winning a match is all about scoring.

Ogunbote was optimistic that with the officiating in the ongoing league that Rangers will come out with positive result from their numerous  away matches.

”We know that we are going to prosecute about three away matches from today and that is where we will begin to know our stand in the league,” he said.

However, coach of the visiting side refused to honor the post match media briefing immediately at the end of the game.