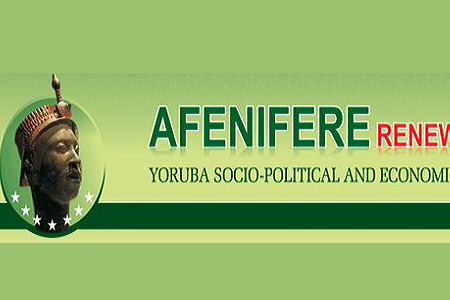 (AFRICAN EXAMINER) – The recent prominence the Afenifere group has gained in the national media is not only instructive to the observers of supposedly a pan-Yoruba group, it is also amusing to watch the dexterity of the media handlers of the obtrusive organisation, as they seize the opportunity to re-launch Afenifere into political prominence. They arguably have never had it so good, except during the June 12 debacle.

Afenifere has suddenly become even more popular than the Benue leaders, Arewa Consultative Forum and Meyetti Allah. Foremost among their recent demand is absolute rejection of the cattle colonies, condemnation of the unfortunate and the needless killings that characterise the herdsmen/farmers clash and the outright rejection of APC report on Restructuring or True Federalism, even before its forrmal presentation by the Nasir El Rufai-led Committee.

But unlike former President Olusegun Obasanjo who ranked the government low in the economy but gave it pass mark in security and anti-corruption fight, Afenifere has virtually turned itself to the loudest opposition party in the land, going by the ‘never-do-well’ stance of its spokesmen, particularly the highly embittered Yinka  Odumakin.

The group formed after the crucible of June 12, 1993 as a socio-cultural organization for the Yoruba people of Nigeria has virtually become a safe haven for political jobbers with all manner of people hiding under it to pursue their rather hidden agenda, particularly those who have axe to grind with others. It is therefore not surprising that a very loyal medium, Africa Independent Television described Afenifere as ‘socio-political’ rather than socio-cultural when the TV station scrolled its news headlines on Wednesday 31st January, 2018.

For instance, on Tuesday 30th January, 2018, members of the Afenifere rose at a meeting presided over by its leader, Rueben Fasoranti in Akure to condemn everything condemnable in the land, in an acrimonious way that was devoid of the typical Yoruba diplomacy, accommodation and large-heartedness – spewing hate, bitterness and ethnic jingoism.

Afenifere has thus unwittingly and inadvertently given itself out as an instrument in the hand of some faceless politicians who urgently need prominence or who need to ‘destroy’ the beneficiaries of the day’s benevolence to cover the lost ground.

As a socio-cultural, apolitical and non-governmental organisation, shouldn’t Afenifere be nuetral and be constructive in its quest as it wades into national discourse? Even the effervescent, and one time restless Niger-Delta and Ijaw social-cultural groups have come of age – radiating with maturity, decorum and love for national integration. The recent stance of Governor Dickson of Bayelsa state, Governor Nyesom Wike of Rivers state and many Niger Delta leaders and youths speak volumes, despite belonging to the opposition party.

Just before the Akure meeting, Afenifere had earlier met with some selected leaders in the East, with a word to enlarge the coast and include the South-South leaders. But they smartly crafted the parley as a meeting of ‘Southwest and Southeast leaders’. As a Yoruba man I cringed to see a display of discredited and frustrated politicians who parade themselves as Southwest Leaders!

At another time, Thisday of January 10, 2018, reported another press release under the title: “Southern, Middle Belt Leaders Demand IG’s Removal over Benue Killings”. As if Afenifere was living under the fear of credibility crisis, it again hid its identity.

The story reads, “Leaders from Southern and the Middle Belt regions under the auspices of Southern and Middle Belt Forum have jointly condemned the unchecked killings that have gone on in Benue State and demanded the removal of the Inspector General of Police (IG), Ibrahim Idris.

The statement jointly signed by Yinka Odumakin (South-west), Senator Bassey Henshaw (South-south), Prof Chigozie Ogbu (South-east) and Dr Isuwa Dogo (Middle Belt), stressed that if not urgently addressed, the killings are capable of destablising the unity of the country.

Again, on January 25, 2018, this same group met under another guise – under the heading: ‘Our land not available for cattle colonies, Yoruba leaders tell FG’ (Vanguard newspaper of January 26, 2018).

The story reads: “Yoruba leaders, under the aegis of Yoruba Summit, yesterday, rejected the proposed cattle colony by the Federal Government, saying it is a ‘violation of the sensibilities of different nationalities whose lands would be partitioned for Fulani herdsmen.”

The news story written by Dapo Akinrefon also smartly refused to identify Ayo Adebanjo, who presided over the meeting a chieftain of Afenifere.

How representative and credible is Afenifere?

As a true Yoruba son, I don’t ever disrespect my elders and I sure will never; but the question that must be asked is, what is Afenifere and who are they representing. Why not in anyway taking away the right of Afenifere to join any group or persons to make demands and condemn, I make bold to say that, Afenifere as presently constituted and going by those who often parade themselves at its gatherings cannot be my representatives. Hence, it is advisable for the group as well as the media to stop demeaning the esteem Yoruba race by presenting it as a team of tribalists with no credible leaders.

How on earth will an organisation who ‘received’ or ‘hosted’ former Goodluck Jonathan on the eve of 2015 presidential election be parading itself as representing the Yorubas? How can a group which virtually controlled the entire Yoruba land in the 1990s but has lost the hitherto overwhelming sympathy and major control of any state claim to be Yoruba leaders? How can a bunch of unrepentant opportunists and a team of haters represent the Illustrious Yoruba race and claim to be its voice? How can a group of ex-convicts, corrupt politicians and discredited statesmen lay claim to such enviable position of leadership of the Yorubas? How can those who have dined and wined with the Dasukis and who have their hands soaked with blood money be my leaders as a Yoruba man?

In most of the Afenifere gatherings, you could hardly find a respectable Oba, a credible governor or trustworthy politicians. Those who often take the rein and have become its spokespersons are those with blood drippings from Dasuki Gate and prison generals of our era. They are the people who speak from both sides of their mouth all times and seekers of political relevance.  They have fallen from the political ladder and they will keep vomiting verbage  to remain relevant on the pages of newspapers. We know their history, particularly in the immediate past. We can no longer be fooled.

While contemplating this write-up, a friend of mine had dismissed the need, as he believed the effort would rather be dignifying the inconsequential Afenifere – ‘calling attention to the ranting ant’.  He described Afenifere as an organisation with no base nor support but with a league of expired politicians and chauvinistic opportunists who can never win elections in their respective wards.

It is therefore essential for the true and selfless Yoruba sons and daughters to reflect on their conquered attitudes and laissez faire dispositions to issues relating to their common destiny as a people. It is very paramount for them to truly take charge before the highly accommodating and sociable Yorubas are portrayed as irredentists, tribalists, anti-North, anti-Igbo, destabilising agents or centrifugal forces. On this subject matter, a commentator who simply identified himself as JOJ stated:

“It is as if we’ve ultimately accepted our fates either as nobodies or second class – if not third class citizens of this part of the world. Ironically however, we parade some of the best the world has to offer in terms of scholarship, erudition, intelligence, creativity, entrepreneurship, exposure and what have you. But the critical question is: what have we got to show for all these feats.

“The pathetic situation of the country is calling for alternative solutions, new initiatives and most importantly – competent and dependable hands to come to the rescue. When will the voices of reason, balance,  progress and responsible leadership arise from this part of the world – I mean the authentic THIRD VOICE?

“If I may therefore ask: who are the likes of Baba Ayo Adebanjo, Chief Olu Falae, Reverend Emmanuel Gbonigi, Yinka Odumakin, Baba Reuben Fasoranti and many others speaking for? Whose agenda are Afenifere (either defunct or renewed), OPC, Yoruba Elders Council etc pursuing? Where did we sit and agree with them to be our spokespersons?

“They have contemptuously arrogated to themselves the right to speak and act on our behalf without the least regard for our feelings, sensibilities or interests. They act as if we don’t exist. They sell ‘Omo Oodua’ dummy to us but their true intentions are always unmasked when issues bordering on the interests or our wellbeing come up,” he said.

It is apparent that for long, some voices have hidden under false pretences to present their selfish agenda as the common voice and position of all the south-west people.

Consequently, a prominent cleric, Dr Abu-Abdullah Adelabu once described Afenifere as a “bunch of tribalists and self-serving ambitious, greedy rivals driven by xenophobia and deep bigotry; and possessed by a delusion of their so-called cultural commonalities.”

Adelabu, the founder of the Africa Society Foundation in London said, “the only logic behind the Yoruba socio-cultural organization is that Afenifere exhibits the very paranoia that has made the Nigerians so hopeless and the Yoruba politicians so careless.”

Is it not time therefore, that the true, unblemished, incorruptible and God-fearing set of people either take charge of the organisation or come up with a more acceptable one that will truly represent the Yorubas with their virtues and ‘omoluabi’ ethos in the national discourse before their image is further battered irredeemably.