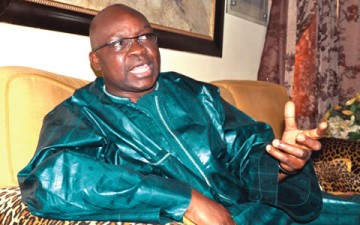 Ekiti State Governor-Elect, Mr Ayodele Fayose has sent a message of congratulations to Osun State Governor, Mr Rauf Aregbesola, on his re-election as governor of the state.

In a statement in Ado-Ekiti on Sunday by his Chief Press Secretary, Mr Idowu Adelusi, Fayose said Aregbesola’s victory was a plus for democracy in Nigeria as it showed that Nigerians could conduct their affairs in peaceful and orderly manner.

He expressed confidence that as the incoming governor of Ekiti State, he would have a pleasant working relationship with Aregbesola in the bid to move their states and the South-West geo-political zone forward.

Fayose also lauded the Independent National Electoral commission (INEC) of conducting a transparent poll devoid of rancour despite initial fears in some quarters.

Fayose also lauded President Goodluck Jonathan for championing the cause of credible elections in Nigeria and standing firmly by it.

The Ekiti governor-elect also commended security agents for providing adequate security before, during and after the election and not allowing anybody to be able to foment trouble.

He reiterated his promise to lift Ekiti to higher level and solicited the support of all in the task ahead.