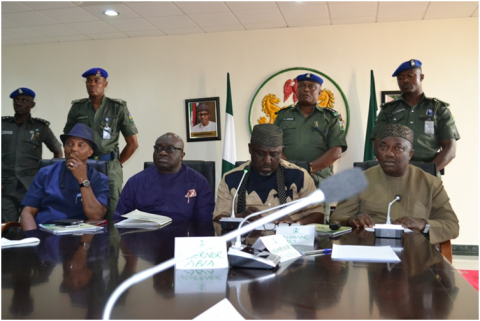 The South east Governors forum on Tuesday announced its resolve to convene an emergency meeting of stakeholders to deliberate on the continued protest of Biafran groups in south east and south- South regions.

This came less than two hours the General officer Commanding GOC, 82 Division Nigerian Army Enugu, Brigadier General Ibrahim Attahiru, while briefing newsmen warned that the Army will not hesitate to invoke its rules of engagement in order to protect Nigeria’s Constitution should the protesters take the laws into their hands.

The governors, advised the Movement for the Actualization of the Sovereign State of Biafra and the Indigenous People of Biafra(IPOB) to tow the line of peace in their agitation.

AFRICAN EXAMINER reports that the pro- Biafran groups have been protesting for several weeks now in the South East, and South- South regions, over the continued detention of leader of Biafra radio, Nnamdi Kanu by security operatives.

Presenting a two page communique of their meeting held at the Enugu government House Enugu to newsmen, Imo State Governor, Rochas Okorocha, said the stakeholders to be consulted will include the Ohaneze Ndigbo, and traditional rulers.

Others are, development unions, the clergy among others, adding that the proposed meeting will take place on the 22nd of this month in Enugu.

“On Security, the issue of MASSOB/IPOB was discussed and we resolved to consult widely with Ohanaeze, traditional rulers, development unions, clergy and other stakeholders on how to ensure lasting peace in the zone.

“In furtherance to this, the South East Governors scheduled an emergency meeting of stakeholders on Sunday 22nd November, 2015 at Enugu.

The governors however, advised MASSOB/IPOB to continue to tow the line of peace as this is the only way to ensure economic development of the zone” the communique stated.

According to Okorocha, all National Assembly members, all honourable ministers and other invited stakeholders are expected to attend the meeting.