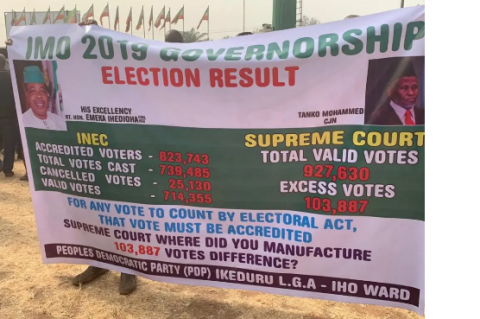 (AFRICAN EXAMINER) – Some Leaders and members of the opposition People’s Democratic Party (PDP) Monday staged a peaceful protest in Abuja against last week judgement of the Supreme Court which upturned the victory of the ex-Governor, Emeka Ihedioha.

The court in a lead ruling by Justice Kudirat Kekere-Ekun held that Senator Hope Uzodinma, was the duly elected Governor of the state having polled the highest lawful votes.

Although, there was no casualty, but the protest ended abruptly at the Eagle Square, due to alleged planned counter action by members of the ruling All Progressives Congress (APC).

Reports said PDP members took off from the party’s complex in Maitama District of Abuja and headed towards the supreme court premises.

However, when they reached Eagles Square, they observed that suspected members of the APC had gathered at the apex court junction.

With this knowledge, the leaders of the protest were said to have directed the PDP members to discontinue from the protest to the Supreme Court, which was originally the terminal point of the protest, so as to avoid a clash, or confrontation with the opposition the suspected members.

It was also gathered that some protesting members of the PDP escaped death by the whiskers as they involved in an auto accident.

The affected protesters at the Transcorp Hilton junction rammed into a truck also conveying some other PDP protesters.