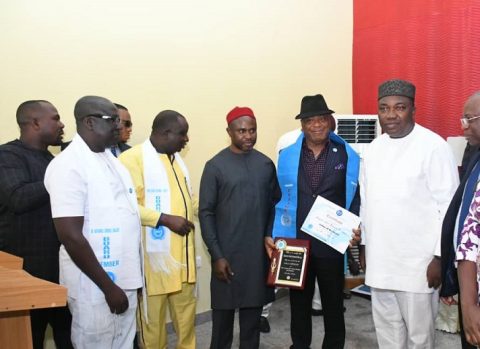 (AFRICAN EXAMINER) – A business mogul and philanthropist, Emperor Chris Baywood Ibe has charged heads of governments in Africa to as a matter of urgency declare state of emergency on youths of the sub region.

Even as he blamed the alarming rate of restiveness across the continent on the neglect of the future leaders.

Ibe, who is the Chairman of the governing council of Nigerian Institute for Oil Palm Research, (NIFOR), Benin City, Edo state, South- South- Nigeria, made the call Thursday in Enugu, during a special capacity building workshop\ conference for selected youths  from across Nigeria, saying  failure to do so would lead to a disastrous future.

According to him, the condition of the present-day youths in Nigeria and Africa was a time bomb waiting to explode, insisting that not until the ugly development is practically addressed by heads of government, the continent would continue to experience youth restiveness and high crime rate.

Our correspondent reports that the event which was put together by the Institute for Peace, Conflict and Development Studies, Enugu State University of Science and Technology (ESUT) in collaboration with the Baywood Foundation and the West Africa Peace Building Network, (WANEP), was attended by over 2000 youths across Nigeria.

Delivering his keynote speech, Ibe, who is also the chief financier of the opposition All progressive congress  APC in Enugu State, posited that all African States and Governments must urgently rise up and save the future of the continent.

He said Nigeria was not spared as the neglect of the youths had aggravated the security situation with kidnappings, suicide bombings, and other organized crimes now on rapid increase.

Ibe added that: “This is no longer time for talks without action, we must now take action without talking, we would be in trouble in the near future if we fail now to put the youths on the right track, and that is why I am calling for a State of Emergency on the youths, a legislative action, a policy, affirmative action by African Nations and Government.”

He however, condemned the use of youths as political thugs by politicians, advising  that “there should be a legislation ceding at least 30 percent of political positions to the youths. When you appoint a 70-year-old man as youth leader, what do you expect the person to do?

“So, this 30 percent affirmative action should be legislated upon; that is what Baywood Foundation is championing. If we don’t prepare the youths for today, tomorrow will come and we will all have problem.

“The youths should say no to political thuggery, kidnappings, or to see politics as a career; you must have something else you are doing before venturing into politics.

He stressed that he was not championing the course because of political interest or to get one position or the other but “because we have interest in the future.”

“We have seen that from the East to the South, the West, to the North and all over Africa, the youths are endowed. They are not lazy; they smart, all that is required is to put them into the right use.

“But I must warn that if we all sit on the fence, the time will come, soon and very soon, these youths will fail and they will see us as part of their problems. So, we are changing the narrative, insisting that they should be involved in political authority, that is what we see missing in Nigeria,” Ibe further stated.

He said Baywood foundation is committed towards remodeling, reshaping the youths with a view to giving them new sense of direction, adding that promoting youth empowerment and development had been its watch word.

Speaking at the workshop with the “Theme: Harnessing the potentials of youths in Nigeria in support of the African Union, and ECOWAS peace and security Architecture” Enugu state Governor, Chief Ifeanyi Ugwuanyi, said his administration since inception,  had been engaging the youths on various areas.

He said this was evident in “providing access to education, having a spread of institutions and providing scholarships for students, upgrading of facilities, especially in the area of laboratories needed to enhance technical skills.”

In his opening remarks, Vice Chancellor (VC) of ESUT, Professor. Luke Anike noted that  the issue of security had remained in the front burner across the globe.

He said: “This heightened security concern is also very visible in Nigeria,” he said, noting that “in the past decade or more, Nigeria has had to contend with devastating security breaches leading to huge loss of lives and destruction of critical national infrastructure.

“Presently, Nigeria is grappling with a broad spectrum of security challenges. There is the Boko Haram insurgency in the North, the Niger-Delta Militancy in the South-south and the ubiquitous Fulani herdsmen.”

The VC added that the various self-determination groups, especially in the Southern part of the country were also key factors of concerns, adding to “issues bordering on kidnappings, armed robbery, suicide bombers, among others.”

“In real terms, we have become endangered even in our work-places, homes and markets”, he stressed.

He noted that it was then necessary for governments and policy makers to constructively harness the large youth population “into positive dividends rather than allow it to become a demographic time bomb.”

The programme which was graced by the academia, government functionaries, youths,  representatives of non-governmental  organizations (NGOs), Civil society groups, among others, came to a climax with  the investiture of the Governor and Emperor Ibe into the Institute.