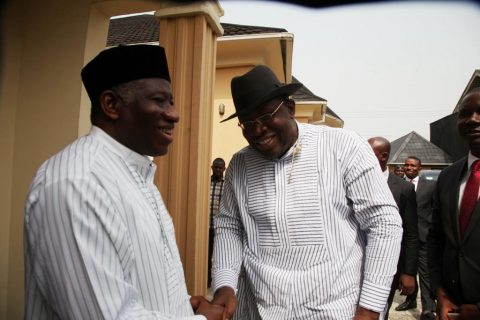 Jonathan, the Governor and the top Ijaw leaders called on President Muhammadu Buhari and the leadership of the All Progressives Congress to be sincere with the implementation of the recommendations of the party’s committee led by Governor Nasir El Rufai of Kaduna State.

The former President and the group said that a holistic and sincere implementation of the recommendations of the report on restructuring would encourage inter ethnic harmony and development in the country.

A statement by the Special Adviser to Governor Dickson on Media Relations Mr. Fidelis Soriwei, on Thursday quoted Jonathan as having said that the issues which fell under the purview of the committee were exhaustively treated during the 2014 National Conference whose sincere implementation would definitely move the nation forward.

He said that it was a good idea that the the APC was able to set up a committee to look into the same grey areas which featured prominently in the deliberations of the 2014 Conference.

Jonathan commended Governor Dickson for playing the leadership role of coordinating the thoughts of the Ijaw people on the sensitive issue of restructuring.

He said that the Governor must be appreciated for ensuring that the Ijaw Nation did not speak with discordant tones on the issue of restructuring.

He stressed that he was pleased that Governor Dickson was performing the leadership role in accordance with expectations by coordinating the Ijaw Nation on the topical issue.

He said, “I am pleased with the caliber of people who came with the Governor to brief me on the issue of the recommendations of the APC Committee on restructuring.

“I must say that I am happy with the role being played by the Governor on this issue of restructuring. Ethnic nationalities must not speak with discordant tones on such pertinent issues. I am pleased that Dickson is coordinating the Ijaw Nation.

“I am also pleased that the APC set up a committee to look into the grey areas to come up with these recommendations. When we were in government, we came up with a confab and several issues were addressed which if sincerely implemented would encourage relationship in the country. A sincere implementation of the recommendations on these grey areas will make the country to move forward.”

Speaking also, Governor Dickson said that he led the delegation of the Ijaw leaders to the former President ton a consultative meeting and to brief him on the steps the Ijaws had taken to build bridges of understanding in the pursuits of what is right in the country.

He explained the meeting focused on the issue of restructuring and the moves being made to bring about a just, fair and egalitarian Nigerian society.

He said, “As you all can see, this is a high-powered delegation of Ijaw elders and leaders from all the zones from Ijaw nation. I am leading them to meet and consult with our respected leader, the former President and also to brief him on steps we are taking; steps we will continue to take to unify our people to build bridges of understanding and to support all that is right and good, not only in this region, but across the nation.

“As you are aware, there is a raging issue of restructuring and moves made to bring about a fairer, egalitarian, stable and prosperous Nigeria. And here, in this state and in this region, we are proud to have our leader, the former President and so today we came to brief him about the steps we are taking to study all the reports, including, the reports of the 2014 Confab which was rightly empanelled by Mr. President and it is gratifying to note a number of the recommendations given by the APC panel are the same conclusions that the 2014 Confab arrived at.”

The meeting was a follow up to an earlier meeting of Ijaw top Ijaw leaders at Kiagbodo, the country home of Pa Edwin Clark on January 20, 2018.

The meeting which had in attendance, the Governor of Bayelsa, Pa Clark, Alabo Graham Douglas affirmed that the 2019 general elections would be a referendum on restructuring across Ijaw land.

The meeting also called on President Buhari and the APC to ensure that the recommendations contained in the report of the APC Committee on restructuring were sincerely implemented.