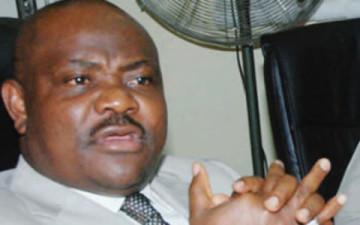 Chief Nyesom Wike of the Peoples Democratic Party (PDP), who is billed to be sworn in today as Governor of Rivers State, does not have the mandate of the people to serve in that capacity, the State Chapter of the All Progressives Congress (APC) has said.

“Chief Wike is being sworn-in not because he won the April 11 gubernatorial election but simply because he was unjustly declared Governor-elect by the State INEC, which never hides its connivance with Rivers PDP. He does not have the legitimate mandate of the good people of Rivers State to act as their Governor,” Rivers APC said in a statement signed by the State Chairman, Dr. Davies Ibiamu Ikanya.

Dr. Ibiamu in the statement issued in Port Harcourt advised Chief Wike not to waste his time planning any long-term project or even trying to change the curtains and furniture in the Government House as he has a very short time to stay there. “We remain confident that the Election Petition Tribunal will do the needful and sack Wike accordingly in view of the materials submitted to them and in view of the immorality associated his occupation of the Government House in view of the outcry of the people of Rivers State that he does not have their mandate to serve as their Governor,” the Rivers APC Chairman said.

He added: “As we wait to reclaim the mandate of the Rivers State people wickedly seized by INEC in their desperation to impose Chief Wike as the Governor of Rivers State, we wish to state that we will not allow the blood of our members spilled in order for Chief Wike to earn his present status to be in vain as we owe them and their families the duty to ensure that a God-fearing Governor in the person of Dr Dakuku Adol Peterside is duly installed in the Government House based on the mandate of the good Rivers State people.

“Chief Wike’s purported election is totally against equity, justice and the rotational stance of the elders and leaders of Rivers State that power should rotate among the upland and riverine areas of the State as it is totally wicked and out of place for the upland that has governed the State for 16 years through Dr Peter Odili and Rt. Hon. Chibuike Amaechi to deny the riverine area of the State a shot at the Brick House. We will do everything humanly possible and within the ambit of the law to ensure that this plot to deny the riverine area their right does not see the light of the day.”

Rivers APC appealed to the people of Rivers State to endure whatever hardship that may come from the draconian and misguided regime of Chief Wike pending the restoration of the mandate they gave to Dr Peterside.

On the threat by Chief Wike to probe the administration of Governor Amaechi, the party said: “We wish to reiterate that the account books of the Amaechi administration are clean as the government was run transparently in the past seven years and seven months that it presided over the affairs of the State. But should Chief Wike resolve to probe the administration, the only thing wrong he may observed in Amaechi’s administration may be the contracts awarded to him (Wike) and his cronies when he was the Chief of Staff to Governor Amaechi from 2007 to 2011 that were either abandoned or badly done.”

Rivers APC hailed Amaechi for finishing strong and wished him higher responsibilities at the national stage. “Amaechi’s stewardship as Rivers Governor is unmatched in the history of the State and we are confident that he will similarly distinguish him well in whatever role our great party and our new President, His Excellency Muhammadu Buhari may wish to assign to him as he finishes his tour of duty as Governor today, May 29, 2015,” the party said