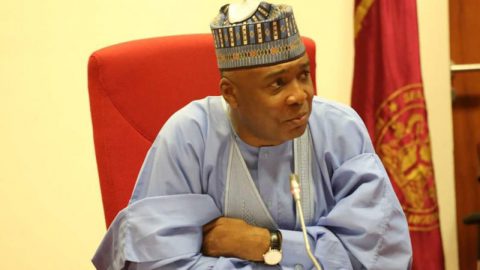 ABUJA, NIGERIA (AFRICAN EXAMINER) – Senate President, Bukola Saraki has said that the on-going process of amending the 1999 Constitution being undertaken by the 8th National Assembly would be completed early next year.

Dr. Saraki stated this when the National Executive of the Nigerian Bar Association (NBA), led by its President, Abubakar Balarabe Mahmud (SAN), visited him at the National Assembly, Abuja.

According to the Senate President, “on the issue of Constitution Amendment, we started very early on this because we know it can be a problem if it comes close to election year.

“Our view is that we have simplified the process. We are working on the earlier document which was completed in the last Assembly but was not signed into law. We try to take important issues first and the members of the committee are working tirelessly on this. By the time it will be ready, we will send it to the Speakers of States Assembly.

“Working in collaboration with the House of Representatives, we hope that the document will be similar and reduce areas of difference. I am looking at the end of this year or the first couple of weeks in January next year or there about, we should be able to debate and pass the amendments and send it to the states.”

On the issue of Electoral Act, he said, “we started this process very early and it has gone through second reading, gone through public hearing. Stakeholders have contributed. Someof the issues like postponement of elections, electoral voting, some of the un-envisaged cases like the case in Kogi State have been taken into consideration and I believe the sooner we can pass the amendments, the better it is in the interest of Nigerians.”

Saraki urged the NBA to continue to speak out on behalf of the people. “NBA needs to have that big voice and that voice should be loud and clear. As leaders, we have to choose between our comfort and what we believe in. And I think at this point, we all ought to do what is right in the interest of the country. It might not be popular but I think that is the responsibility we have at this particular time for the interest of the country.”

On the issue of economy, Saraki said: “we met very early in 2015 with members of NBA and the people in the private sector. We also met with Nigerian Economic Summit Group and we are already addressing the laws that will ease doing business in Nigeria.

“We came up with different laws. It is at the back of that, that we came by the economic bills that we have either passed or are being worked upon, like the Petroleum Industry Bill, Nigerian Railway Act and others. We believe we must encourage private sector participation in the provision of infrastructure. We know government cannot do it alone.”

‘’The Senate President who described the NBA as partners with the senate, said, “I think there is a role that the NBA has to play in working with us. What I can assure you is that when we get those laws, we have to work closely with each other and some of our laws are so outdated and not in line with modern economy. Some of these laws were made as far back as 50 years ago.”

Earlier in his speech, NBA President, Mahmud told the Senate President and his colleagues that the Bar Association is interested in the amendment of the Electoral Act, especially as regards the postponement of elections on the basis of security related issues, Constitutional amendments, Justice Sector Reforms particularly the Independent Corrupt Practices and other related offences Commission (ICPC), Economic and Financial Crimes Commission (EFCC), Prisons Reforms and the Legal Aid Council. He specifically said that the Legal Aid Council is in dire need of funds to carry out its duties.

On Constitutional amendments, the NBA President said the timely completion of the exercise would help to stabilise and strengthen the nation’s democracy, while identifying other grey areas crying for attention like the recent postponement of an election due to security concerns.

Mahmud said postponement of elections due to contrived security reasons a threat to the independence of the Independent National Electoral Commission (INEC).

“Postponing elections will not augur well for the stability and strengthening of democracy in Nigeria”, appealing to the President of the Senate to take a close at it during the National Assembly’s constitution review exercise.