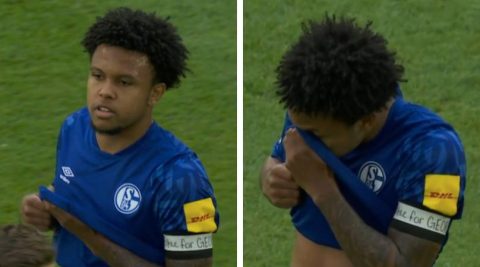 (AFRICAN EXAMINER) – Schalke 04’s Weston McKennie showed support on Saturday for protests in the U.S., sparked by the death of an unarmed black man at the hands of a white police officer in Minneapolis.

The 21-year-old US-born McKennie wore an armband with the message “Justice for George” during Saturday’s 1-0 Bundesliga defeat at home to Werder Bremen.

A photo of McKennie wearing the armband was published by Schalke 04’s official account for the US, with the message “#JusticeForGeorge.”

Various American sports stars had previously shown support for the protesters after the death of 46-year-old George Floyd at the hands of the police this week.