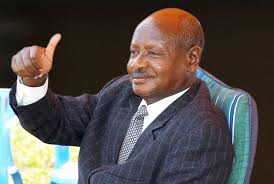 (AFRICAN EXAMINER) – U.S. President Donald Trump’s comments may have angered many African leaders, but not Uganda’s Yoweri Museveni, who says he loves Trump’s blunt honesty and comments on Issues.

President Museveni got legislators from Uganda laughing out very loud when he said “ I love Trump”.

Earlier this month,  President Donald Trump reportedly referred to Haiti and African nations as “shithole countries” during a meeting with a bipartisan group of senators at the White House.

While some African countries like Nigeria and South Africa reacted by summoning U.S. ambassadors to explain the insulting comment, Uganda’s Museveni instead praised Trump.

“I do not know whether he is misquoted or whatever, but when he speaks I like him, because he speaks frankly. The Africans need to solve their problems. They need to be strong, in the world you cannot survive if you are weak.” He said