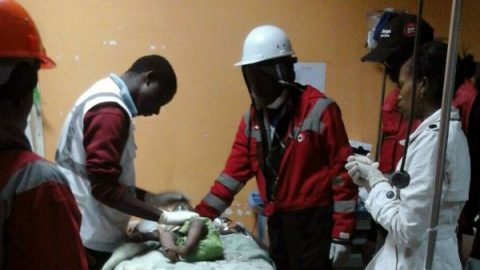 NAIROBI, KENYA (AFRICAN EXAMINER) – Rescue and humanitarian workers have found alive, a six-month-old girl trapped in the debris of a collapsed building, four days after the disaster, in Nairobi, Keyan capital.

The toddler, Dealeryn Saisi Wasike, had since been reunited with her father, Ralson Saisi Wasike. Kenya Red Cross confirmed that the lucky baby did not sustain any physical injury.

Red Cross confirmed that the baby was found in the rubble at 04:00 local time (01:00 GMT), in a bucket wrapped in a blanket. The agency also indicated that she appeared dehydrated, but without visible injuries and was immediately rushed to hospital for treatment after being found.

Although, Red Cross, initially announced that baby Wasike was about one and a half years old, but it tweeted, quoting her father, who confirmed the age.
While no fewer than 23 people have been confirmed dead, about 135 have been rescued and about 93 have been reported missing. The six-storey residence structure came down after a heavy downpour in the capital.

Officials alleged that the structure has already been marked for demolition, while its owner, Samuel Karanja Kamau was said to lack permission to let the 119 room building.

Mr. Kamau who is likely to be slammed with man slaughter charge in court, is yet to make comment on the sad incident and authorities’ accusation.
.