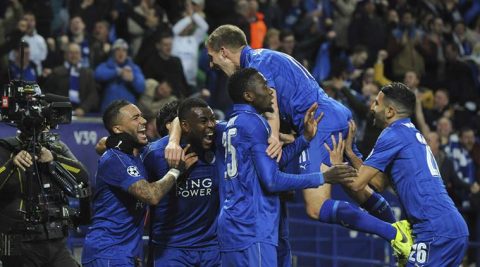 Leicester City reached the Champions League quarterfinals with a 2-0 victory over Sevilla on Tuesday, turning around their round-of-16 tie to advance 3-2 on aggregate.

Wes Morgan and Marc Albrighton were the unlikely goal scorers, and Kasper Schmeichal saved a penalty after Samir Nasri was sent off for Sevilla.

The visitors had the first chance of the game as Nasri unleashed a powerful shot, but Schmeichel made the save at the near post.

Nasri then picked up his first booking for a kick at Leicester’s Wilfred Ndidi in the 17th minute.

Leicester scored from their first true opportunity of note on 27 minutes. Riyad Mahrez sent in a free kick from the corner of the box that fell for Morgan to turn in with a shin at the back post.

The goal put Leicester ahead thanks to their away goal, and Sevilla pushed forward in response, with Wissam Ben Yedder launching a shot wide.

But the hosts did well to disrupt Sevilla in midfield and made it to the break with the lead.

Sevilla made changes at the break, as Stevan Jovetic and Mariano came on to replace Gabriel Mercado and Pablo Sarabia, while Stephen N’Zonzi dropped back.

Leicester hearts were in their mouths in the 53rd minute when Sergio Escudero’s swerving effort crashed back off the crossbar, but it was the Foxes who doubled their lead on the night two minutes later.

From a long throw-in, Christian Fuchs found Shinji Okazaki, whose shot from the top of the box was blocked but fell to Mahrez. The Algerian sent the ball back in for Okazaki, and after a poor defensive header it fell for Albrighton to score from a low shot.

Sevilla still needed one goal to send the game to extra time, and after Joaquin Correa came on for Ben Yedder he forced Schmeichel into a 73rd-minute save.

Nasri was sent off a minute later after being showed a second yellow card for going nose-to nose with Vardy.

Despite going a man down, Sevilla maintained their attack and earned a penalty within five minutes after Schmeical brought down Vitola. But the Danish keeper was up to task, smothering N’Zonzi’s rather weak attempt.

The chance was gone, and Sevilla boss Jorge Sampaoli was sent down the tunnel with eight minutes to play.

Vardy should have finished the tie with three minutes left but fired wildly over and the Foxes survived a scare in stoppage time when Correa shot over — before the full time whistle was met with wild celebrations.

Leicester now await Friday’s draw, when they could be paired against the likes of Barcelona and Bayern Munich, while Sevilla’s European adventures end without a trophy after Europa League titles the past three years./ESPN