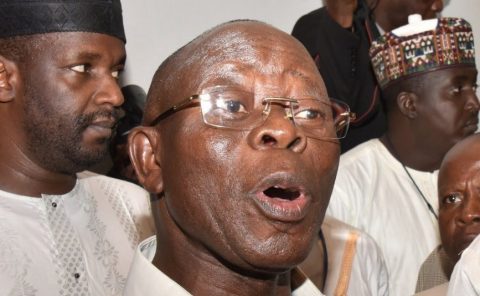 (AFRICAN EXAMINER) – The National Chairman of the All Progressives Congress (APC), Adams Oshiomhole, says the candidate of the People’s Democratic Party (PDP) Sen Diri Douye will not be sworn in as the new governor of Bayelsa State because he does have the required votes spread across the state as stipulated by the constitution.

Mr Oshiomhole spoke after the Supreme Court sacked David Lyon of the APC as the governor-elect of the state and asked INEC to declare the candidate of the party with the next highest number of votes and required constitutional spread as the winner of the state’s governorship election.

“PDP candidate does not have one-quarter of the total lawful votes cast in that election in two-thirds of the eight local government areas in Bayelsa State.”

Meanwhile, PDP spokesperson, Kola Ologbodiyan has blasted Mr Oshiomhole over his comments describing it as “an empty and inconsequential ranting,” whose apparent plots to trigger violence in the state has failed.