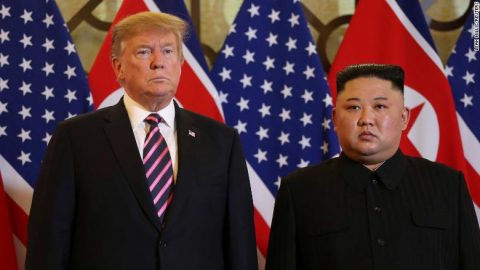 (AFRICAN EXAMINER) – A summit between the US President Donald Trump and the North Korean leader Kim Jong-un has ended without agreement.

This stalemate according Trump followed the US’s refusal to North Korean demands for sanctions relief.

“It was all about the sanctions. They wanted the sanctions lifted in their entirety and we couldn’t do that.” Mr Trump told reporters.

The pair had been expected to announce progress on ‘’denuclearisation’’.

“Sometimes you have to walk and this was one of those times,” Mr Trump said.

Speaking at a news conference after the summit, in the Vietnamese capital of Hanoi, Mr Trump clarified that no plans had been made for a third summit.

The original White House programme for the day had planned for a “joint agreement signing ceremony” as well as a working lunch for the two leaders, but expectations were abruptly dashed with the cancellation of both.

Some considered Trump’s decision as a good move.

“From Mr Trump’s perspective it will be a loss he can weather,” Andray Abrahamian, a North Korea expert at Stanford University, wrote.