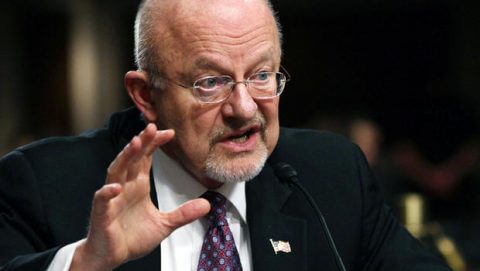 The 75-year-old top American spy told the House Intelligence Committee that “it felt pretty good”. His resignation had been expected, as President-elect Mr. Donald Trump prepares to unveil his officials.

“I submitted my letter of resignation last night which felt pretty good. I’ve got 64 days left,” he confirmed his action to the committee, still, indicated that he would remain in the post until President Barack Obama leaves office in January 2017.

With regards to his position, Mr. Clapper has authority over 17 different agencies including the Central Intelligence Agency (CIA), the Drug Enforcement Agency (DEA), and the (Federal Bureau of Investigation (FBI).

Over 107,000 employees report to him with a combined budget of over $52 billion.

In his role, he has often been defending the National Security Agency (NSA), which is one of the covert agencies that his office oversees.

Mr. Clapper was asked during a 2013 congressional hearing whether the NSA collect any type of data at all on millions of Americans. He answered “No’’.

The outgoing Intelligence Director has served on the job for six years after previously working for the US Air Force and the Defence Intelligence Agency.