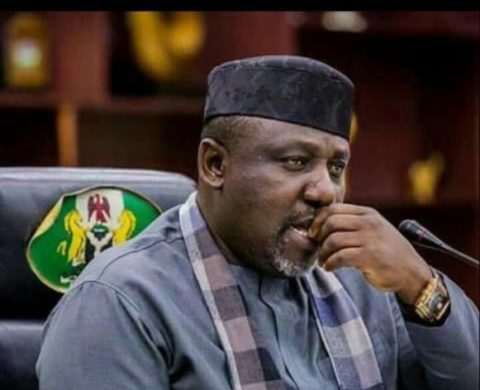 (AFRICAN EXAMINER) – Imo state gubernatorial candidate of the All progressive congress APC in the just concluded 2019 general polls, Senator Hope Uzodinma has described the allegations that he worked for the candidate of the People’s Democratic Party (PDP) and winner of the election, Emeka Ihedioha as unfounded and malicious.

The  Senator, who came  a distant 4th position in the poll, described the accusation by the Imo state governor, Rochas Okorocha  as a mere plot to tarnish his image, after working against the APC.

Governor Okorocha, had recently in the media alleged that  the National Chairman of the APC, Comrade Adams Oshiomhole, and Uzodimma, who represents Imo West senatorial district in the upper chamber of Nigeria’s National Assembly (NASS) were behind the party’s inability to win the March 9th,  governorship election in the state.

The outgoing Imo governor, equally  lambasted Senator Uzodinma for allegedly celebrating with the Peoples Democratic Party PDP candidate and winner of the election, Chief Emeka   Ihedioha, after he was declared by the Independent National Electoral Commission INEC in Owerri, the Imo state capital.

But, Uzodinmma,  who reacted to the allegation Thursday via his media aide, Mr. Mbadiwe Emelumba, pointed out  that, “Okorocha is in the habit of lying to tarnish people’s image, because he was the person that worked against the APC from the beginning”.