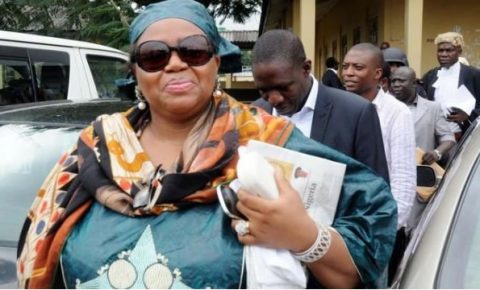 Similarly, Justice Lateefat Okunnu ordered Ugo-Ngali who fainted in court Friday January 13, 2017 while the sentence was still ongoing, to make a refund of N754 million to the Federal Government (FG).

In her ruling Thursday, Justice Okunnu declined the application filed by the defence Counsel, Mr. Edoka Onyeke for the non-custodian sentence, owing to Ugo-Ngali state of health. The convict who came from the LUTH was on the wheel chair while the judgement was delivered.

Justice Okunnu held that the plea by the defence counsel for ”non-custodian sentence of the 2nd defendant” must be rejected and that she could exercise her discretion on the length of time the convict would spend in prison.

She slammed a cumulative jail term of 69 years on the convict who is the Managing Director of Ontario Oil and Gas Limited. Still, the jail term is to run concurrently for 10 years.

Justice Okunnu specified that the term would be effective from January 13, 2017, when Ugo-Ngali and her accomplices were actually pronounced convicted.

In the same vein, the first defendant and convict   – Wagbatsoma, is reportedly under house arrest presently, in the United Kingdom UK. The convict is being held over money laundering, involving the sum of £12m National Health Service Trust fraud.

The jurist held that Wagbatsoma and Ugo-Ngali defrauded the Federal Government of N340m in the third quarter of 2010 and N414m in the fourth quarter of 2010.

She admitted that a forensic audit by Akintola Williams Delloitte, proved that the defendants did not remit an excess of N754m to the Federal Government.

It would be recalled that the Economic and Financial Crimes Commission EFCC on August 1, 2013 arraigned Ugo-Ngali, Wagbatsoma and their company (Ontario Oil and Gas Limited) to court, then alleging that the defendants defrauded FG the sum of N1.9bn collected as subsidy for importing Premium Motor Spirit PMS to the country.

Justice Okunnu had also on January 13, 2017 acquitted an official of the Petroleum Products Price and Regulatory Agency PPRA, Mr. Babafemi Fakuade. The official was initially indicted in the oil subsidy scandal.

The final sentence has been shifted twice before Thursday, due to alleged severe health condition of Ugo-Ngali.