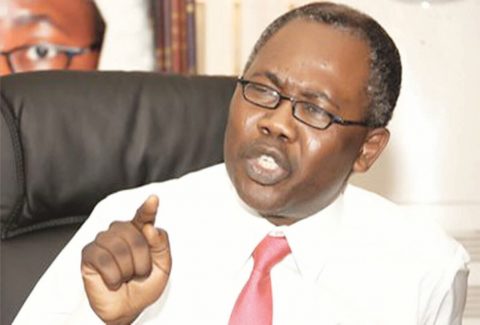 (AFRICAN EXAMINER) – The arraignment of former Attorney-General and Minister of Justice, Mohammed Adoke was on Wednesday, stalled at the FCT High Court in Gwagwalada over confusion from the Economic and Financial Crimes Commission, (EFCC) the prosecuting agency.

The EFCC counsel Bala Sanga told the court that he did not know why he was in court.

“My Lord, we have not served the charge on the first, second and third defendant, we have only served the fifth, sixth and seventh defendants.

The prosecutor further told the court that the second defendant, Aliyu Abubakar was on the run and the commission had to set up a 24-hour manhunt for him.

He added that the commission had intended to arraign all the seven defendants on Jan. 24 after effecting service on all of them.

“I am shocked as to why it came up today but subject to the convenience of the court, I ask for a short adjournment to enable us serve them’’.

Responding, counsel to Adoke, Mr Paul Erokoro, (SAN) confirmed that his client was yet to be served.

Erokoro, however, told the court that they were willing to waive service and proceed with the matter.

“It is true that the charge has not been handed to us, but we consider ourselves served and so we waive service and are ready to go on with the arraignment.

Moreover, the lawyer said that by virtue of Section 136 of the Administration of Criminal Justice Act, (ACJA), service was not necessary.

For his part, Mr Wole Olanipekun, (SAN), counsel to the second defendant, insisted that his client had been served.

Olanipekun also countered the argument of the prosecutor saying that his client had not been on the run and that in fact, his client was represented in court.

Mr Mahmud Magaji, (SAN), counsel to the third defendant, Rasky Gbinigie wondered why the anti-graft agency failed to serve the charge on his client who had been in their custody.

The trial judge, Justice Abubakar Kutigi however, insisted that the law provided for every defendant to be served before plea would be taken.

The judge adjourned the matter until Jan. 23 for arraignment.

Recall that the EFCC had filed criminal charges against Adoke over his alleged indictment in the Oil Propective Licence (OPL) 245.

The former Attorney-General of the Federation and Minister of Justice was on self exile for four years when the charges were slammed on him by the Federal Government.

The former justice minister was arrested on Dec.19 by the EFCC on arrival to the country and has been in its custody since then.