10 Killed, 15 Injured In a Fresh Bomb Explosion In Turkey 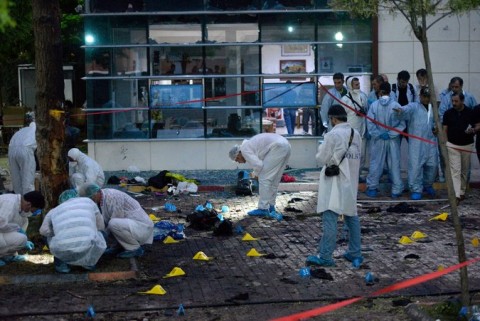 BALTIMORE, MD (AFRICAN EXAMINER) – No fewer than 10 people, including foreigners, Tuesday were killed, while about 15 were injured in an explosion which rocked tourist area of Istanbul, Turkey.

Turkish officials confirmed that a Syrian National carried out a suicide bomb attack in the Sultan Ahmet district, near the city’s famous Blue Mosque.

President Recep Tayyip Erdogan in his reaction to the attack, said Turkey was the “top target for all terrorist groups in the region”, adding this was caused because he was “fighting against all of them equally”.

Similarly, Turkish Deputy Prime Minister, Numan Kurtulmus confirmed that the victims were foreigners, while the suicide bomber was a Syrian, born in 1988.

An Eyewitness confirmed to the BBC: “It was a suicide bomb. I went there and saw it and came back to the hotel. There was chaos. Everybody was running somewhere”.

Istanbul in the recent months, has recorded sporadic attacks by a far-left group, while violence has increased between Turkish forces and PKK Kurdish militants, mainly in south-eastern Turkey, after a ceasefire broke down.

Turkey has also been hit by bomb attacks which prosecutors claimed was carried out by the IS.

It would be recalled two suicide blasts killed over 100 people in the Turkish capital, Ankara in October, 2015 while more than 30 people were killed in another attack near the border with Syria in July last year.