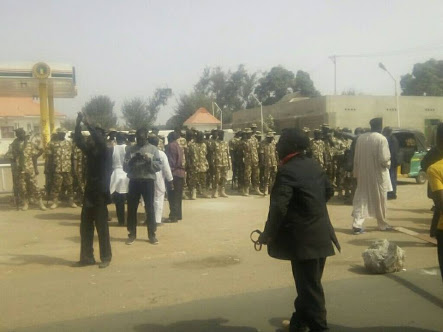 BALTIMORE, MD (AFRICAN EXAMINER) – No fewer than 10 members of the Islamic Movement of Nigeria (IMN) have been killed in Kano, during a clash which broke out between them and security operatives.

Violence erupted when police attempted to disperse thousands of members of the Shiite who were on annual procession from Kano to Kaduna for the Ashura religious festival.

An eyewitness told AFP that police fired teargas and canisters on the Shiites so as to disperse them from possession.

It would be recalled the IMN members exactly a year ago, clashed with the convoy of the Chief of Army Staff, Lt. Gen. Tukur Buratai along Kano-Kaduna road, while on procession for the same annual rites. There was also bloody clash between the Shiites and security operatives in 2014.

During the clashes, IMN recorded high casualties, including members of the immediate family of the sect leader, Sheikh Ibrahim al-Zaky Zaky. The IMN leader has since been in detention over the 2015 bloody clash.