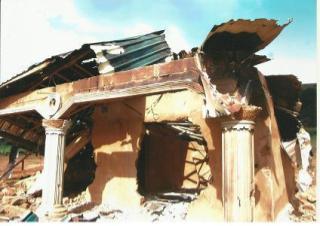 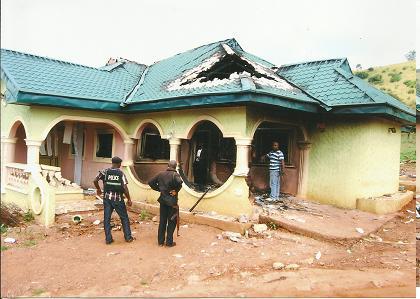 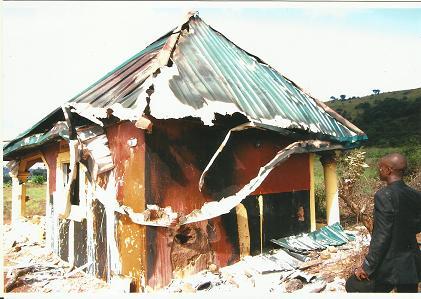 one of the razed buildings

Hell was let loose in Abbi Community, in Uzo-Uwani Local Government Area of Enugu State Friday as the entire village was  thrown into a battle field over an alleged power tussle between some its indigenes  and the Vice Chairman of the council, Mr. Maxwell Odoakpa, who also hails from the area. 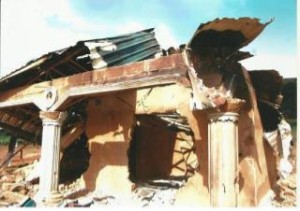 one of the razed buildings

On the other side of the battle are some indigenes led by a renowned herbalist, Emmanuel Udoji.

Our correspondent observed that at least, over 12 houses, including a police post, have been set ablaze in the last one week by one of the warring community.

An eye witness told African Examiner that trouble began when Udoji planned the commissioning of a police post he built for the Nigerian Police without informing the Vice-Chairman of Uzo-Uwani Council, Mr Maxwell Odoakpa, who is from the community and his father Igwe Isaac Odoakpa, the traditional ruler of Ezi-Ikolo.

The source disclosed that the Vice-Chairman, who sees himself as the chief security officer of the community, became infuriated over the planned commissioning of police post without his approval, saying the herbalist arrogated powers of government to himself, insisting that that such action was unacceptable to him.

Meanwhile, the crisis has already compelled some indigenes of the area to relocate to neighbouring towns for fear of reprisal attacks.

Narrating his own side of the story to our correspondent, the herbalist said,  “what actually happened was that armed robbers were disturbing people along Nrobo-Abbi road for a very long time now, then I made efforts to set up a police duty post and neigbhourhood watch to check the excess of robbers in the community.

“Before I embarked on the projects, I consulted the traditional ruler of Ezikolo, HRH Igwe Isaac Odoakpa and the town union of the community; everybody gave approval to the projects. I did not just embark on the projects because I can do it, the police duty post has the community approval.

“Why do they not stop me when the police post was being constructed? The next thing was that the Vice Chairman of Uzo-Uwani Local Government council, Mr. Maxwell Odoakpa who incidentally is the son of the traditional ruler of Ezikolo in Abbi community misinformed the chairman of the council, Mr. Onwubuya Cornell that the police duty post was aimed to intimidate and harass people.

“I was made to understand that the chairman instructed that the police post be shut down. What I now saw was youths in their large number, with gallons of fuel and other dangerous objects, pulling down my estate of 11 houses, before they set it ablaze. “They ransacked my residence, and carted away cash and other valuable property running into millions. My offence was that I built a police duty post and set up police assisted neighborhood watch for the community”.

The Witch Doctor disclosed that he had written a petition to the Enugu State commissioner of police, Adamu Abubakar over the wanton destruction of properties and possible loss of lives in the area.

Udoji said he had  lost virtually everything he laboured for, adding that even his life had continually to be under threat.

The petition written on behalf of the herbalist by his lawyer, Mr. F. J. Nwodo added that “The reason for this gruesome attack is that Chairman of the Local Government was wrongly informed that our client has attracted police post and organized Neighborhood watch for his own advantage only, thereby taking over some powers of the Local Government Chairman.

“The Local Government Area acting without calling both sides gave approval of the destruction, boasting that he is the government and nothing shall happen”.

Reacting to the development, Chairman of Uzo-Uwani Local Government Council, Mr. Cornell Onwubuya said that he is yet to be briefed by any body on the development in Abbi communal war.

He said:“How can I fuel up crisis in an area I am the chief security officer? My Vice Chairman is from Abbi community and he knows everything about the crisis in that community”, the chairman stated.

In his own reaction when contacted, the Vice Chairman said neither the council nor youths of Abbi community instigated the crisis, saying that people of Nrobo, a neighboring community had claimed that the police post was a trespass on their land.

“As I speak with you, one Simon who lives in Ghana has admitted before the Enugu State commissioner of police that he set the police post ablaze. He threatened to do more if the native doctor failed to stay away from his land.

“Right now as we speak, he is being detained at Enugu State CID for arson”, he said.

The State Police Public Relations Officer, PPRO, Ebere Amarizu, DSP, when contacted, said he was yet to be briefed on the crisis.