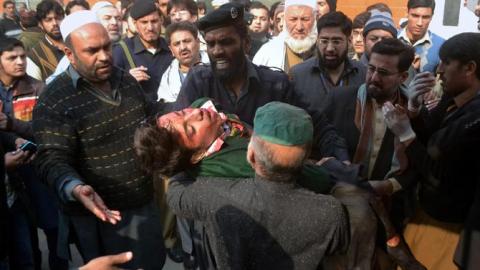 Gunmen believed to members of the Pakistani Taliban group, Tuesday invaded and opened fire on a Military School in Peshawar and killed not less than 132 children.

The attack, which consumed estimated 141 people, the Pakistani officials and Military confirmed, has been curtailed, while those sustained injuries have been taken to the hospitals for treatment.

The bodies of the dead children have been carried out of the hospitals inside the coffin, amid presence of agonized parents as well as thousands of mourners.

Taliban Spokesman indicated that the invasion was a retaliation to army recent offensives against the dreaded group at the North Waziristan and nearby Khyber area, in which many insurgents were killed.

Meanwhile, global condemnation has trailed the massive and shocking killing as the United States (US) President, Barack Obama described it as “horrific attack”.

Similarly, the Pakistani teenage Child education Crusader, Malala Yousafzai, declared that the massacre was senseless, yet, commended the Pakistani authorities for the prompt rescue operations in the Military school.