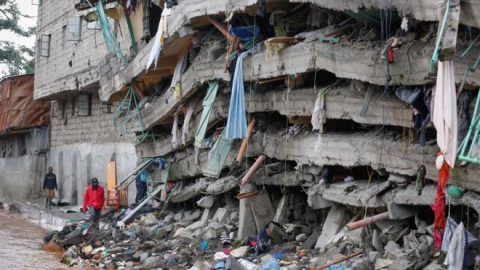 (AFRICAN EXAMINER) – An eight storey building under construction in Owerri, Imo capital on Thursday collapsed claiming two lives, with many others injured, the News Agency of Nigeria (NAN) reports.

The incident occurred around 6.30 pm at Yaradua Drive near Lords Chosen church.

Disaster managers including the National Emergency Management Agency (NEMA), Imo counterpart, SEMA and the Red Cross were on ground carrying out rescue operations.

Mr Evans Ugoh, Head of Imo/Abia operations office of NEMA confirmed that two casualties had so far been recorded while seven persons had been rescued.

Ugoh disclosed that many people were believed to have been trapped at the debris of the collapsed building.

He said that rescue operation would be on till it was ascertained that nobody was still trapped under the debris.

“We have taken those already rescued to the hospital for medical attention, while further search is still ongoing,” he said. (NAN)