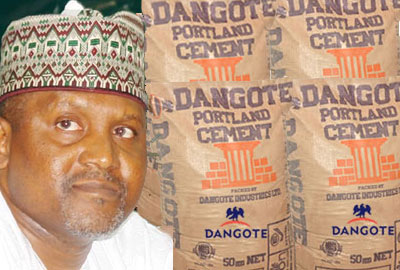 Leading cement manufacturer, Dangote Cement Plc has declared its 2013 financials recording an upsurge in its Nigerian sales volume to the tune of 13.3million tonnes leading to a 40.6 per cent increase in profit before tax over the previous year.

The company declared a profit before tax of N190.8 billion for the year. 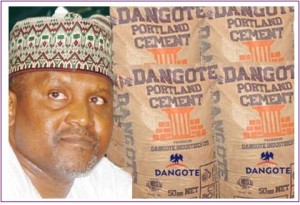 The audited results of the company announced in Lagos indicated that the pre-tax profit is 40.6 per cent higher than that of the previous year while consolidated revenue grew up to ₦386.2bn, representing an increase of 29.4 per cent.

While the results celebrated the increase in the Company’s sales volume, it showed further that total Nigerian cement market grows by 15.6% to nearly 21.2 million tonnes.

Dangote cement attributed the increased sales volume to its direct-to-customer deliveries strategy and described it as proving highly successful accounting for more than 50 per cent of sales, with its Obajana plant sales volumes up 37.2% and Ibese up by 40.4 per cent.

Consequently, the company recommended a dividend increase of N7.0 per ordinary share as against N3 paid out in 2012 an increase of 133 per cent.

Dangote Cement’s Group Chief Executive, Devakumar Edwin expressed satisfaction at the performance of the company saying the impressive run was as a result strategies deployed of sound management of the prevailing economic situation.

He said; “Dangote Cement made excellent progress in 2013. As the Nigerian cement market grew by a strong 15.6% we managed even better growth of 28.2%, with our revenues increasing by 29.4% to ₦386.2bn. Our direct-delivery strategy is proving very popular with customers and I am pleased to report that direct-to-customer deliveries now account for more than half of our sales.

“We increased our margins despite continuing disruption to our gas supply and believe that the gas distribution infrastructure will be more robust in 2014, enabling us to improve our margins even further. At the same time we are looking at ways to diversify our fuel supplies to mitigate the impact of any future disruption and reduce the cost of using alternative fuels to gas.

“Our financial strength has allowed us to increase our dividend by 133% to ₦7.0 per share and the coming year will see our new factories opening across Africa as we begin to deliver on our promise to become Africa’s leading cement producer, generating strong and sustainable returns for our shareholders.”

Dangote Cement, which is Africa’s leading cement producer is a fully integrated quarry-to-customer producer with production capacity of 20.25 million tonnes in Nigeria with three in the countrya and plans to expand in 13 other African countries with new operations beginning to come on stream across the rest of Sub-Saharan Africa.

The Group plans to have around 60 million tonnes of production, grinding and import capacity in Sub-Saharan Africa by 2016.

Dangote Cement’s Obajana plant in Kogi state, Nigeria, is the largest in Africa with 10.25mta capacity across three lines and a further 3mta capacity currently being built.

Edwin stated that Dangote Cement would be investing several billion dollars to build manufacturing plants and import terminals across Africa. Current plans are for integrated or grinding plants in Cameroon, Ethiopia, Republic of Congo, Liberia, Senegal, South Africa, Tanzania, Kenya and Zambia, as well as Ivory Coast and Ghana, and import/packing facilities in Ghana and Sierra Leone.