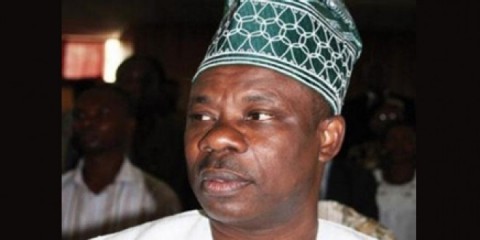 (AFRICAN EXAMINER) – Some members of the ruling All Progressives Congress (APC) from Ogun Western Senatorial District (Yewa) Thursday staged a protest to the Headquarters of the Independent National Electoral Commission (INEC), alleging manipulation in the State Governorship primary.

The aggrieved politicians staged the protest under the aegis of Masses Against Electoral Fraud, are all members of the All Progressives Congress and Yewa Collective Action Movement.

Specifically, they claimed that the exercise which produced the party’s gubernatorial candidate, Prince Dapo Abiodun was fraught with many irregularities.

Reports said the protesters arrived around the INEC premises as early as 8:30am, with differemnt anti-APC placards, such as: “INEC must disqualify Dapo Abiodun” and “Security agencies should investigate Dapo Abiodun”.

However, on reaching the INEC entrance, they were prevented from getting close to the electoral body’s headquarters by a combined team of security agencies. The security operatives maintained that they (protesters) could not block the road.

The protesters insisted on entering INEC premises office, despite of being threatened by officers of the Department of State Services (DSS).

They however proceeded with their action, as they moved from the INEC to national secretariat of the ruling APC.

While responding to newsmen, the spokesperson of the protesters, Mr. Ishola Adeshina, described the emergence of Prince Abiodun as ‘’fraud.”

The anointed candidate of the outgoing Ogun State Governor Ibikunle Amosun is a serving member of House, Hon. Abdul-Kabir Adekunle Akinlade. The candidate who was dropped by INEC weeks after his announcement hails from Yewa district of the South west State.