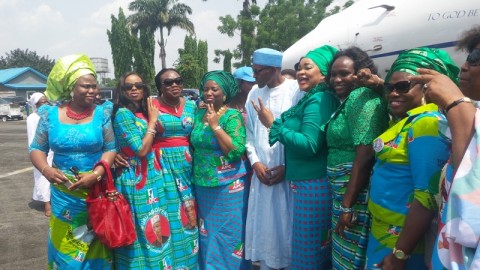 ENUGU, NIGERIA (AFRICAN EXAMINER) – A gender-based Non-governmental Organization (NGO), Alliances For Africa (AFA), has urged the Enugu State chapter of All Progressive Congress, (APC) to implement the 35 percent affirmative action, so as to afford women in their fold the opportunity of vying for elective offices of their choice during the 2019 general election.

It posited that it remains the only way to embrace the National Gender Policy which was formulated to promote a 35 percent affirmative action for women in all governance processes.

Speaking yesterday when she led other top officials of the organization on a courtesy visit to the Enugu State Chairman of APC, Dr. Ben Nwoye in his Enugu office, programme Manager of AFA, Mrs. Blessing Duru, said “as the ruling party in Nigeria, “we want to urge you to embrace the National gender policy.

She lament that over the years, Nigerian women have been obviously marginalized in all the nation’s democratization processes, in spite of the fact that dozens of them are literate and eminently qualified to occupy various elective positions.

According to Duru, it is unacceptable to AFA, that women still hold less than five per cent of important decision-making positions in the country.

The programme Manager hinted that the organization has concluded plans to carry out sensitization/ capacity building for women, including those of the APC fold in the state, adding that the programme was also aimed at increasing the awareness in active politics participation.

In his remarks, APC State Chairman, Nwoye applauded the NGO for the wonderful idea, which he described as a “welcome development”.

He said the party holds women in high esteem in the state hence, it was the first to produce a female State Chairman in the present political dispensation.

According to him, “the role of women in every sector of the economy of any nation, including Nigeria, cannot be over- emphasized, adding that if given the opportunity, women always add value to whatever they do.

While advising Nigerian women to always summon the courage to seek political offices during elections, Nwoye, declared that no one has ever been in the comfort of his bed room and get elected into positions of authority.

“For me, what our women politicians really need is not capacity building, but moral and financing support”

“Our party, the APC, both in Enugu and National level believe so much in women empowerment, and that is why we are going to key into this your programme” the Chairman stated.