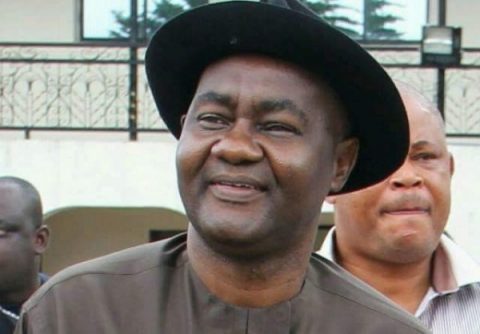 (AFRICAN EXAMINER) – The Senator representing Rivers South-East Senatorial District in the National Assembly, Senator Magnus Ngei Abe on Wednesday declared his intention to contest for the governorship of Rivers State in 2019 on the platform of the All Progressives Congress (APC).

Abe, who made the declaration while addressing a crowd at the inauguration of Freedom House, his liaison office in Port Harcourt, said his decision to run for the governorship position is for the interest of the future of the state.

“I am glad to say that I have reached a decision which I am going to share with you on a burning issue  if Senator Magnus Abe is going to vie for the governorship of this state under the APC or not. I have taken every advice and every opinion”.

“Having taken all these into consideration, I, Magnus Ngei Dunebari Abe, I have decided to seek the nomination of the All Progressives Congress, Rivers State, in the interest of our state and in the interest of the future of our people.” He said

He commended his supporters for conducting themselves with decorum, saying their actions were not sign of weakness but strength.

The senator added, “We have conducted ourselves with decorum; we have shown and will continue to show great respect for our leaders. This is not our weakness, it is our strength. We must not allow conflict entrepreneurs and frustrated politicians whose only hope for relevance and economic sustenance is the continuous balkanisation of our party”.

“Some of them are here and some of them are there. But, all of us need to ensure that the congresses are free, fair and transparent. Any attempt to hold another hotel-style congress in Rivers State will break faith with the people of the state that we are a party committed to doing the right thing”.

“Without the confidence of the voting public, a political party becomes a mere social club. It will be good for dancing and partying but it will not win any elections”.

In his opening speech, former Deputy Speaker of the House of Representatives, Prince Chibudom Nwuche, called on the APC to learn from the past mistakes of the People’s Democratic Party (PDP) as the country approaches the 2019 general elections.

Nwuche said, “Let APC learn from the mistakes of the People’s Democratic Party. PDP was imposing candidates and that was why some of us left. Today, it is happening in the APC but thank God, Senator Magnus Abe came up. Let us have a transparent congress and let the popular candidate emerge.”

Describing Abe as one of the best sons of Rivers State, the former deputy speaker, who is also a chieftain of the APC, said Rivers State needs a leader like the senator to treat all indigenes and residents of the state equally.