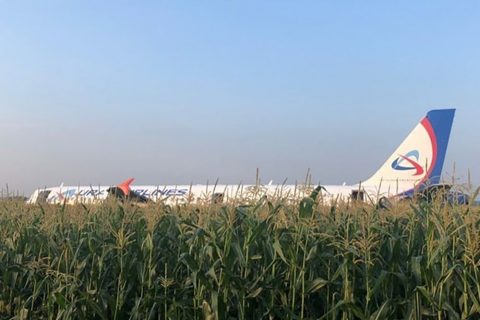 (AFRICAN EXAMINER) – A Russian airline pilot averted disaster Thursday, safely landing an Airbus A321 jet with over 230 passengers and crew on board in a cornfield near Moscow after it struck a flock of seagulls and lost power in both engines.

The Crimea-bound plane was forced to land early Thursday without landing gear deployed after seagulls damaged its engines shortly after takeoff, the civil aviation watchdog said in a statement.

“After takeoff, birds got caught in the engines, with the left engine stalling immediately,” co-pilot Georgy Murzin, 23, said in a video posted on a Ramenskiy page on VK.com.

“Then they got caught in the second engine and it became unstable, and also stalled. There wasn’t enough thrust, and we lost altitude. We landed in a field manually, the commander took control.”

Video reportedly from within the plane showed the passengers remained quiet as it approached a vast corn field, only for shouting to erupt as the jet touched down.

The crew “has shown fantastic skills and self-control. The captain was a Yekaterinburg resident Damir Yusupov.

Initial reports gave conflicting figures for the number of people aboard. Yusupov is 41 years old veteran pilot, according to the airline.

Russian authority said 23 people had been hospitalized after the crash, including nine children, but the crew’s skillful landing prevented any serious injuries.