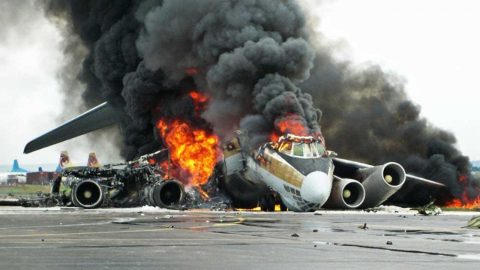 (AFRICAN EXAMINER) – A Russian transport plane has crashed in Syria, killing 26 passengers and six crew members believed on board.

The Defence Ministry was quoted as saying that the crash occurred during landing at the Hmeimim airbase, near the Syrian coastal city of Latakia.

Russia has confirmed that the plane was not fired upon, and preliminary data suggests that a technical malfunction could have caused the accident.

However, investigation on the crash is currently underway.

On 7 January 2018, Russian forces alleged they had foiled a drone attack on Hmeimim.

Tuesday’s ncident is just a week after Russian warplanes were damaged at the airbase in a rebel mortar attack.

Hmeimim is the Russia’s main base for air strikes on rebel groups in Syria; Strikes that have enabled Syrian President Bashar al-Assad’s forces to recover much lost ground.

Russian strikes have reportedly killed many civilians, although, Moscow insists that it only targets rebel “terrorist” fighters.

It would be recalled that Russia launched its military operation in September 2015, claiming that it was acting upon a request by her aged ally, President Assad.