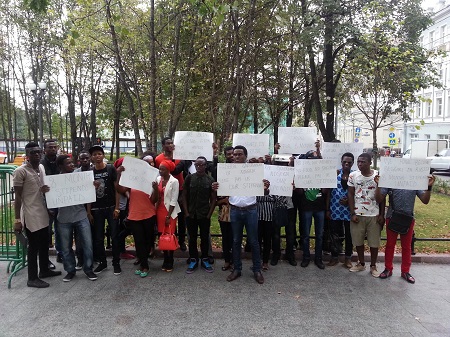 No fewer than 322 Nigerian students under the Federal Government scholarship are currently begging for food and means of survival in Russia.

House of Representatives Committee Chairman on Diaspora Affairs, Abike Dabiri-Erewa disclosed this in a statement on Thursday.

According to her, the House Committee on Diaspora Affairs has recently received with a deep sense of pain, incessant sad tales and complaints of about 322 Nigerian students on Scholarship from the Federal Government of Nigeria now begging for food in Russia.

“The Committee on Diaspora Affairs continues to receive numerous cries for help for our students in Russia through several channels; both at home and abroad. Many of these students (and their parents) rejoiced upon receipt of the Bilateral Education Agreement Scholarship Awards by the Federal Scholarship Board through the Federal Ministry of Education and rightly so as a scholarship should normally be a thing of joy.

“However, right now many of the parents and students alike are wishing they were never awarded the BEA scholarship as it appears to have brought them more hardship than joy,” she said.

Dabiri-Erewa stated that for over eight months the students were yet to receive their monthly stipends, saying that this act of unpaid student stipends was highly reprehensible and beyond human justification.

“The haphazard manner of payment of BEA scholarship awardees needs to be addressed immediately with a view to implementing a permanent and long term solution. It is noteworthy that towards the end of 2013, the House Committee on Diaspora Affairs had to intervene to resolve a similar issue for this same set of 322 students in Russia.

“Barely nine months later and we are back again making a case for the students to ensure they are given what is rightfully theirs; this present means of scholarship administration for our students overseas is certainly unsustainable and the Federal Ministry of Education urgently needs to implement a policy for students’ stipend payments which is sustainable, timely and efficient,” she stated.

According to her, the lack of prompt payment and subsequent student cash strap has led to some of the students begging from their fellow African counterparts, (on the same BEA scholarship from their countries) including those from Ghana, Namibia, Uganda and even Sierra Leone.

She said this act certainly did not bode well for the students and only further dents the nation’s already ailing international image, stating that there was the need to act fast to ensure “we do not provoke our students to adopt immoral means of survival.”

Dabiri-Erewa appealed to the Minister of Education through the Federal Ministry of Education to look into the above matter and ensure that it was resolved with immediate effect while striving to implement a system which is sustainable and capable of operating with little or no human interference.

“Although citizens of Nigeria, these students are our children, our pride, our tomorrow and we must treat them as precious gems that they are lest we give them reason to forsake their fatherland in years to come,” she said.