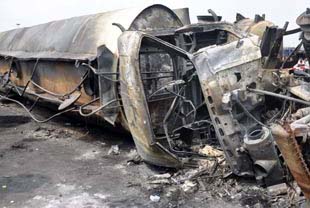 No fewer than four oil tankers have been burnt in Lagos, Nigeria as another tanker explodes in the process of fuel being transferred to another tanker.

The incident occurred around Rainbow area of Mile 2 around 10 am, says spokesperson, National Emergency Management Agency, NEMA, Ibrahim Farinloye, but says no life or property was lost.Farinloye said the fire involved an open tank of about 16,000 litres of diesel, saying that a technical error was recorded during the process of diesel being transferred to another tanker.

“This led to explosion which spread to four fuel tankers at Rainbow area of Mile 2. Three fire trucks from federal fire service and four fire fighting appliances from the Lagos State Fire Service were mobilized and brought the situation under control.

“There were no threats to property and lives. The fire started around 10.00 am, it was confine so as not to spread to residential and commercial structures around,” he stated.

Director, Lagos State Fire Service, Rasak Fadipe also confirmed that four fuel tankers were burnt, saying that his men battled to put out the fire as three fire trucks from Sari-Iganmu, Ikeja and Isolo were mobilized to battle the fire.

General Manager, Lagos State Emergency Management Agency, LASEMA, Dr. Femi Oke-Osanyintolu said the transfer of the fuel was not properly done which led to the fire that spread to three other fully loaded tankers.

Early last month, a tanker exploded around Iganmu area of Lagos roasting about 15 people to death and properties worth billions of naira destroyed.

Also last month, another tanker exploded while fuel was being transferred from it to another, leading to the burning of four trucks, bur no life was loss.