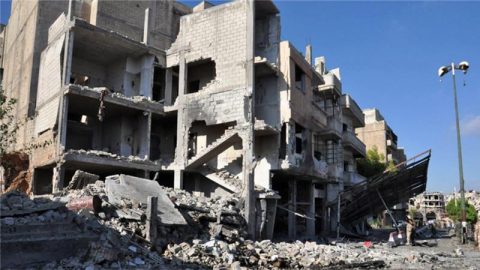 BALTIMORE, MD (AFRICAN EXAMINER) – No fewer than 40 people have been killed in four bombings in government-controlled areas of Syria and in a city dominated by Kurdish forces.

It is not clear yet, if the series bombing have any link.

The deadliest attack was recorded outside Tartous, on the Mediterranean coast, which hosts a Russian naval base and the heartland of President Bashar al-Assad’s Alawite sect.

The so called Islamic State (IS) bomber had reportedly targeted Kurdish militiamen in Hassakeh. Still, the group has not claimed responsibility for the attack.

It was narrated that a car bomb was detonated on the Arzoneh motorway bridge, a local police source cited.

The Homs Province Governor confirmed that the car bomb targeted a military checkpoint, leaving many soldiers as casualties.

According to Police, one person was killed in a bombing on a road in Saboura, a heavily-guarded western suburb of Damascus.

Opposition activist Yousef al-Boustani said the area was home to security officers and their families while the attack represented a major security breach.