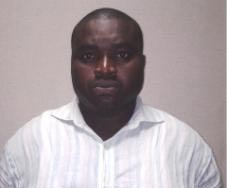 A 40 year old drug trafficker  Amobi Okoye has been nabbed by officials of the National Drug Law Enforcement Agency (NDLEA) at the departure hall of the Murtalla Muhammed International Airport (MMIA) Lagos.

The suspect, a Nigerian living in Ancona, Italy was arrested while trying to board an Alitalia flight. He was found to have swallowed 63 wraps of substances that tested positive for cocaine weighing 1.030kg.

In his statement, Amobi said that he came to Nigeria in search for a wife but decided to smuggle cocaine because he was broke.
According to the NDLEA Airport commander, Mr. Hamza Umar, the suspect was nabbed with the help of scanning machine.

In his words, “a 40 year old Nigerian living in Italy, Amobi Okoye has been arrested for trafficking in cocaine.

“The suspect was nabbed with the assistance of scanning machine. While under observation, he excretes a total of sixty-three (63) wraps of powdery substances weighing 1.030kg that tested positive for cocaine. He is currently under investigation”.

The suspect who has been living in Italy since 2009 disclosed that he came home in December 2013 in search for a wife but got involved in drug trafficking because he was broke.

The suspect, who hails from Enugu state said, “My involvement in cocaine trafficking was an afterthought. The reason I came to Nigeria in December 2013 was to search for a wife. In the process, I spent all the money with me. While searching for money to buy my ticket back to Italy, I was introduced into drug trafficking.”

“They promised to pay me 4,000 dollars in addition to all travel expenses. It was a difficult decision for me but it was my last hope.”

Chairman/Chief Executive of the NDLEA, Ahmadu Giade called on members of the public to avoid drug trafficking and support the anti-drug campaign.

He said,  “Drug mules must shun drug trafficking in their best interest and that of the society at large. It is important for them to realize that the financial inducement offered by drug barons is insignificant compared with the damage to their reputation and that of their families. The best solution is to say no to drug trafficking at all times”

The suspect will be charged to court soon.