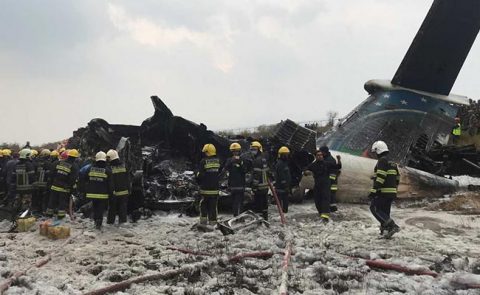 (AFRICAN EXAMINER) – A total of 49 people have been killed in a Flight BS211 crash at Nepal’s Kathmandu airport.

There were 71 passengers and crew on board of the plane.

Reports say rescuers pulled bodies from the charred wreckage of the plane, operated by Bangladeshi airline US-Bangla, after a raging fire was put out.

The airline in its first reaction has blamed air traffic control, but the Nepali authorities say the plane made an “unusual” landing.

The Flight veered off the runway while landing Monday afternoon.

One survivor who managed to break through a window was quoted as saying that the aircraft gave a violent shake, and this was followed by a bang.

According to police Spokesperson Manoj Neupane 22 people have so far been treated in hospital for injuries.

The authorities account also has it that eight people earlier reported to be missing are now presumed dead.

The crashed plane which was flying from the Bangladeshi capital Dhaka was a Bombardier Dash 8 Q400 turboprop and was 17 years old.