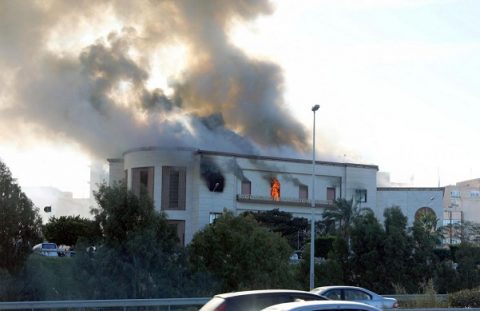 The three attackers began their assault with a car bomb, damaging vehicles and buildings, and then opened fire on the ministry, a security source said.

Two managed to get inside and blow themselves up. The other was killed by ministry guards.

Heavy smoke rose from the building, which was surrounded by security forces, as people were rushed to hospital. The health ministry said that apart from the attackers, three people had been killed and at least 21 injured.

Interior Minister Fathi Ali Bashagha said however that apart from the attackers only two people were killed, adding that investigations were continuing into the identity of the assailants.

“Security chaos in Libya offers propitious conditions for IS (Islamic State) and other terrorist groups,” Bashagha said at a joint news conference in Tripoli with Foreign Minister Mohamed Taher Siala.

IS has been active in Libya in the turmoil since the overthrow of Muammar Gaddafi in 2011.

The group took control of the coastal city of Sirte in 2015 but lost it late in 2016 to local forces backed by U.S. air strikes.

Siala called for a partial lifting of the UN arms embargo on Libya to help authorities counter militant groups.

He said the foreign ministry had been targeted because “it is a symbol of sovereignty”.

“All important documents have been saved,” he said, adding that he deplored the death of one ministry employee in the attack.

The foreign ministry earlier issued a statement saying: “The Libyan people are waging a war on terrorism on behalf of the world.”

The UN Support Mission in Libya (UNSMIL) condemned the attack, stressing the need to “prevent terrorist groups from turning Libya into a haven or an arena for their crimes”.

Siala said security arrangements agreed between Libya’s Government of National Accord and the UN after a month of clashes in the South of Tripoli had yet to be implemented.(Reuters/NAN)