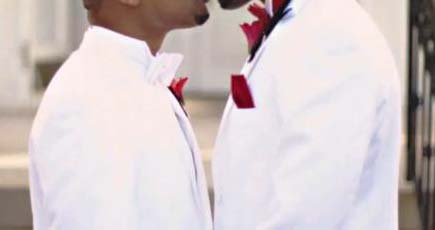 An Orthodox Jew who stabbed marchers at a Jerusalem gay pride parade 10 years ago launched another knife attack at the same type of parade in the same city Thursday, stabbing and wounding six people who were on the streets for the event, police said.

Video aired on Israel’s Channel 10 shows what appears to be part of the attack at Thursday’s gay pride parade in Jerusalem: a man making quick slashing motions at people on a Jerusalem street, including one holding a rainbow flag, while others try to subdue him.

Israeli police say Shlissel, an Orthodox Jew, was released from prison three weeks ago after serving a 10-year prison sentence for stabbing and wounding three marchers at a Jerusalem gay pride parade in 2005.

Israeli Prime Minister Benjamin Netanyahu said Thursday that the government would “pursue justice for those responsible” for the latest attack. The government fell short of calling it an act of terror, but Netanyahu, did call it, “a despicable hate crime.”