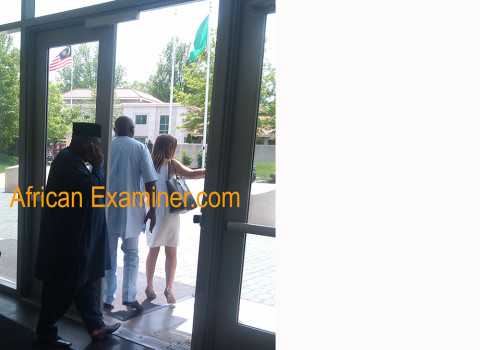 The Federal Government of Nigeria has come under scathing criticism over its reported plan to hire foreign public relations firms to manage its response to the kidnapping of over 200 girls of Government Girls College, Chobok, Borno State. 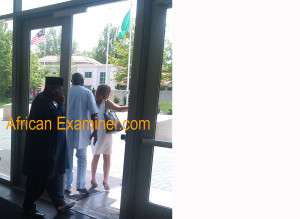 Mr. Doyin Okupe Seen leaving Nigeria’s embassy in Washington DC on Wednesday May 28, 2014 after meeting with some Foreign PR firms.

According to The Holmes Report, the Nigerian government representatives, led by the Petroleum Minister Deiziani Allison Madueke, have met about five public relations firms in London regarding the assignment, as it attempts to counter mounting criticism both inside and outside the country.

The Holmes Reports further reported that the development follows the mass abduction of schoolgirls by the Boko Haram militant group more than a month ago.

Activists from the #BringBackOurGirls group have ramped up pressure on the government, amid international uproar over the girls’ disappearance.

Condemning the move, the Public Relations Consultants Association of Nigeria (PRCAN) said that the purported decision to engage foreign public relations firms was neither strategic nor advisable as it instead represented a needless strategic gaffe added to the many avoidable missteps of the Federal Government in handling its communication and reputational challenges.

Also, PRCAN three months ago challenged All Progressive Congress (APC) following its engagement of the services of AKPD Message and Media, a United States-based PR and Public Affairs Consultancy firm to manage the party’s campaign ahead of the general elections.

“The purported search is premised on a wrong foundation of white washing Nigeria before foreign media and audiences. However, the real challenge before the Federal Government of Nigeria lies elsewhere and that is at the home front with its citizens, representing the primary stakeholders.”

It counseled: “Public Relations is based on the RACE principle – Research, Action, Communication and Evaluation – that demands strategic insight and action as the basis for engagement (communication) with stakeholders. The current run of bad press arises from a failure to set the agenda through right actions for positive media coverage of the Federal Government and Nigeria.”

PRCAN also said that the task before the Federal Government required the deployment of professionalism and strategic measures to regain the confidence of its primary stakeholders since no amount of engineered positive mention in foreign media would change that.

The association however reminded officials of the government of the extant Nigerian law on public relations practice which did not support foreign expedition.

In its words, “The position of the law is clear. While PRCAN has nothing against our foreign counterparts, particularly as Nigeria is deservedly a preferred destination for Foreign Direct Investment, such engagement must be within the confines of Nigerian law. The Nigerian government cannot be seen to be working against its own laws.”

Rather than expending a reported $800 million (about N136 billion) on hiring foreign public relations firms, PRCAN urged federal government to deploy more resources to the Federal Ministry of Information to efficiently discharge its responsibilities.

According to PRCAN, “The Federal Ministry of Information would benefit greatly in its core mission of stakeholder engagement for the government if it receives the sums being mentioned in connection with this dubious mission. We believe that 50 years into independence and some weeks after the World Economic Summit for Africa in Nigeria our Government should be promoting indigenous expertise and be concerned with its standing with its internal stakeholders over and above other considerations.

“The Federal Government of Nigeria must desist from actions such as the recent listing requirements rolled out by the Securities and Exchange Commission for ratings agencies and this move to hire foreign publicists that says it has no faith in Nigerian professionals because that undermines the basis for its own existence.”

African Examiner reports that apart from the Petroleum Minister meeting with some foreign PR firms in London, where she intends to spend $800 million to launder President Jonathan’s battered foreign image, a Presidency team led by the president’s special adviser on public affairs, Doyin Okupe is already in US at the time of filling this report to meet with some public relations firms in Washington DC.