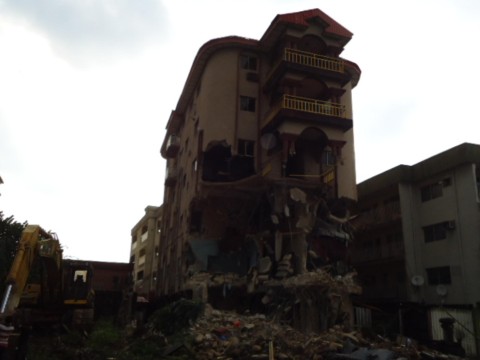 Determined to rid the state of baby factories and child trafficking, the Abia State government Monday demolished a 5-storey hospital building at No. 101 Okigwe road, Aba, where the unholy acts are perpetrated. 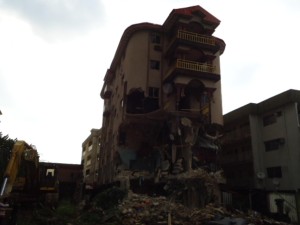 The 5 storey building which houses the Aba branch of Ezuma Hospital, is being used by its proprietor, Dr. James Ezuma, to harbour pregnant teenagers including the sale and adoption of babies.

African Examiner reports that the demolition exercise which came weeks after a team of policemen had laid watch on the building for a month, lasted more than 2 hours under the supervision of the state Commissioner for Physical/Urban Planning and Urban Renewal, Elder Godwin Nna.

The destruction, attracted a huge crowd, just as a combined team of security agents were on ground to provide adequate security.

Speaking with newsmen at the scene of the demolition exercise, Commissioner Nna explained that the state government embarked on the destruction in conformity with the laws of Abia State against child trafficking and kidnapping in human persons.

He added that a similar exercise had been carried out in Afara-Ibeku, Umuahia the state capital.

Our Correspondent gathered that Ezuma who hails from  Ndiokeke Ndiakunwata in Arondizuogu, Ideato North local Government Council of Imo State also have another branch in Egbu Owerri, Imo state, and had on several times, been arrested by security operatives over the conversion of his hospital to a baby factory.

Said a resident of the area: “At a time, Ezuma was arrested with over 40 pregnant teenagers and some nurses during an early morning raid by policemen.

Also speaking with reporters, an Aba based medical practitioner who did not want his name in print said the Nigeria Medical Association state chapter of the NMA in the state had taken the matter to the national body where Ezuma was cautioned against using his hospital to harbour pregnant ladies.

“After our national body’s persuasion to discourage him from using his hospital for the illicit business failed on deaf ears, the Association withdrew his practicing license as a medical practitioner because there is no way a medical practitioner who is meant to save lives and deliver women of their babies will in turn negotiate the sale of such baby or babies.

“It was after his practicing license was withdrawn by NMA that he went into running an NGO, Ezuma Women and Children Right Initiative where he continued with his illegal trafficking in human persons,” the medical Doctor stated.