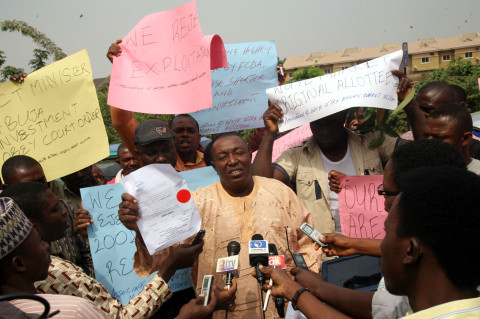 Hundreds of traders staged peaceful protest in Abuja on Thursday over alleged plan by Abuja Investment and Property Company Limited (AIPCL) and All Purpose Shelter Limited to allocate the shops to new allottees. 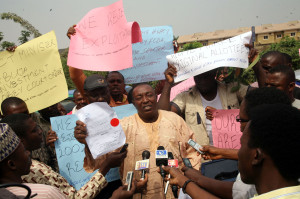 Some of the inscriptions on the various placards carried by the aggrieved protesters, include: “We have lost livelihood due to 11 years of oppression”; “We reject exploitation”; “Mama CJN save our soul, let justice prevail”; “11 years after ejection, handover our shops” among others.

They also raised alarm over violation of Court Order which directed the parties to maintain status-quo pending the determination of the suit filed by the traders.

Speaking on the development, Barrister Sepiribo Peters of the God’s People Legal Counsult, warned the Developer, against violation of substantive Order.

He observed that the original allottees who were unsatisfied with unfolding events, dragged Federal Capital Territory Administration (FCTA) and the developer, All Purpose Shelters Ltd and Abuja Investment and Property Development Company Limited to Court adding that attempt by the developer to open the shops for operations tantamount to Contempt of Court.

The land for the construction of the allottees under the aegis of Association of Wuye Ultra-Modern Market Allottees, was approved in 2002 by the FCT Minister after taking the census of the traders who were displaced by the inferno that gutted the new Wuse market (now NNPC Mega station) in 2001.

“The subject matter in court is to the effect that the plaintiffs are entitled to their shops as they have paid the sum the Honourable Minister of FCT asked them to pay to be allocated the shops. Instead of delivering the shops to these poor traders, the FCT wants them to pay millions of naira to a private company for another re-allocation of same shop to the tune of N5 million,” Peters said.

In a petition letter dated 2nd January 2014 and titled “Threatened violation of court orders in Abah Dennis & 369 ORS vs Hon. Minister of FCT & 3 ORS”; addressed to the FCT Minister also called for the intervention of the Senate President and Speaker of the House of Representatives.

It reads “It has become necessary and too unavoidable to alert the authorities of the several threats of the defendants especially All Purpose Shelters Ltd. and Abuja Investment and Property Development Limited to disobey the orders of the High Court of the Federal Capital Territory, Abuja that ordered that status quo ante bellum in respect of matters pending to the occupation and use of all the shops in Wuye Modern Market, should be maintained.

“In the spirit of violating the orders of the court, the defendants especially All Purpose Shelters Ltd. and the Abuja Investment and Property Development Company Ltd. have decided to re-allocate the already allocated plantiffs’ shops to others and taking huge sum of money from these unsuspecting members of the public.

“This act sounds so much in violation of the subsisting orders to the Court. Again, it is also sounds a bit curious and unlawful for shops that the plantiffs have paid for to be re-allocated to others by the said mentioned defendants.

“People are pointing accusing fingers at Mallam el-Rufai, the former Minister of the Federal Capital Territory, Abuja under Chief Olusegun Obasanjo’s regime. He is said to be behind the taking away of the people’s shops to give to All Purpose Shelters Ltd. a private company acting under the cover of Abuja Investment and Property Development Company Ltd.

“It is advisable that Dr. Goodluck Jonathan’s adminsitration do not give an approval to the clear oppressive acts of Chief Olusegun Obasanjo and Mallam el-Rufai against the poor market people. These are fellow Nigerians although they are not as rich as chief Olusegun Obasanjo and Mallam el-Rufai. These poor people’s interest should be sacrificed on the altar of societal and political status of these politicians.

“We are soliciting for your intervention as we equally seek for the intervention of all well meaning and God fearing Nigerians to please come to the aid of these poor market people.

“The present administration of Dr. Goodluck Jonathan and the Honourable Minister of Federal Capital Territory Abuja should have sympathy for those poor market people.

“Please and please, do intervene and let not the oppressive act of the past administration be taken as part of the minuses of this administration.”

While over 500 traders who got allocation in the Wuye Ultra Modern Market are yet to take delivery of the shops, others who were allotted shops in Mabuchi and Garki markets have taken delivery of their respective shops.