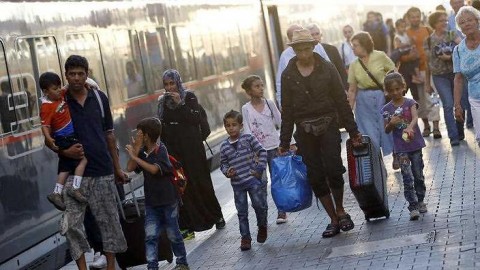 The desperate journey by the immigrants from Syria has taken a new dimension, as convoy of cars by German and Austrian activists have traveled to Hungary to move the settlers into Western Europe.

The development occurred barely 24 hours after the first set of immigrants arrived Austria, after trekking 180km along a motorway, from Budapest train station, as there were no means of transportation.

Today, the convoy of about 140 cars left Vienna for the Hungarian capital, Budapest, as part of a private initiative dubbed “refugee Convoy”.

One of the activists, Angelika Neuwirth, explained that their aim was to take the immigrants back to shelters in Austrian capital.

Neuwirth “I think this is my duty. I’m a mum, I’m a woman from Austria and I can’t close my eyes anymore, “We are all human. No-one is illegal.”

Earlier, buses and special trains have been transporting the immigrants from the Hungarian border to Vienna.

In the meantime, the Pope has encouraged every Catholic Parish in Europe to play host to a migrant family to ease the burden they suffered during the journey and reduce pressure on Government.

Pope Francis made the call Sunday during the Angelus prayer, urging “every parish, every religious community, every monastery, every sanctuary in Europe” to take in a family.

It would be recalled following days of confrontation and chaos, Hungary opened its borders with Austria and transported thousands of migrants to the frontier.