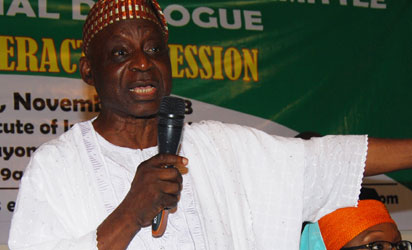 The Afenifere Renewal Group (ARG) has called on President Goodluck Jonathan to immediately publicise the recommendations of the Presidential Committee on National Dialogue, which was submitted on Wednesday. 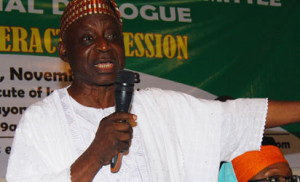 In a press statement signed by its Publicity Secretary, Kunle Famoriyo, the group said making the report a public document was the only way President Jonathan’s wish to convoke the conference could continue to enjoy the support of Nigerians.

“Nigerians have supported the call for the conference and participated fully in the public sessions. Many travelled far distances to participate in the conference. One of them was the late Babarinde Omojola, who never returned home but died after making his presentation in Akure,” the statement said.

“The only way to respect and honour the sacrifices Nigerians made towards the successful completion of the committee’s task is to publicise the report.”

“If President Jonathan truly has no personal interest, as he claimed, in the conference and he is prepared to allow the will of Nigerians to prevail, the first thing to do is to release the report to the public as a feedback process,” it said.

“Afenifere Renewal Group will not be railroaded into a national conference, whose modalities and terms are skewed against the interest of our people. Certainly, we will only support the proposed conference for as long as it is transparently planned,” it added.

The statement said the ARG’s demand was to see Nigeria restructured into a truly federalist country with viable and autonomous federating units, saying that it was convinced that this was what majority of Nigerians wanted, “as our wide consultations have shown. We also believe that the conference, when finally convoked, will succeed and produce desired outcome only if it is a conference of Nigerian ethnic nationalities.”

ARG advised Jonathan not to put the cart before the horse as he did announce that he had instructed the Minister of Finance to make budgetary preparation for the conference, adding that it was good to make financial preparation for the conference, insisting that the first thing to do after the submission of the report was to make its content public.