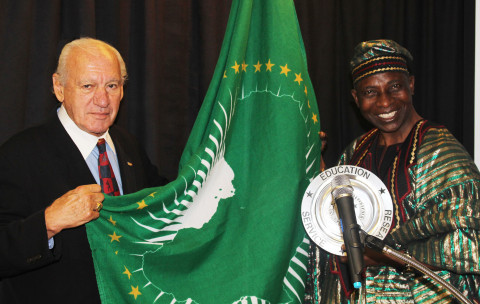 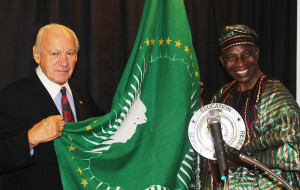 A renowned cultural ambassador and chair of the African Heritage Foundation (AHF), Chief Tunde Adetunji has been honoured with the prestigious United States Sports Academy Award (USSA) for his immense contributions to the promotion of culture through the facilitation of sports and other developmental noble ideals.

The foundation under the leadership of Ambassador Adetunji, primarily promotes Africa in the Diaspora but it is also actively involved in a wide range of areas including, cultural  revolution, economic development, education, technology research and service, health and prevention initiative, training, sports and sporting activities, talent hunt and development.

The foundation is also engaged in human resources and capacity building, tourism, broadcasting, consultancy and community projects supporting and giving to the less privilege as well as homeless people.

Against this background, the activities of the foundation have gained the attention of several institutions, corporate bodies, international and regional organizations such as United Nations (UN), Africa Union (AU) commission, Martin Luther King Center, CDC, World Affairs Council, City of Atlanta, Georgia State senate, universities and many others that have identified, endorsed and participated in the foundation’s projects, over the years.

Similarly, the academy which was established in 1972 by Dr. Thomas Rosandich has continued to grow and flourish under his stewardship with programmes in more than 60 nations and the award was envisioned to acknowledge the role culture and sports will play internationally on Africa growth and development.

In addition, the academy is historically instrumental in the documentation of great achievements in sports, and honours athletes of repute, such as Pelé, Michael Jordan and Muhammed Ali and its campus is also home of the American Sport Art Museum and Archives.

The formidable collection hosts more than 1,000 works of sports related art, as well as an outdoor sculpture park.

Presenting the award at a ceremony which was attended by top executives, faculty members and staff of the institution, the founder and Chief Executive Officer (CEO) of the academy, Dr. Rosandichvacknowledged the pioneering initiative of the AHF whose cultural emancipation, vision, wisdom and knowledge through its “Celebrate Africa journey through the ages Exhibition” now serves as conduit to bridge the gap and build the bridge between the 54 nations of Africa, USA, the Diaspora, and the global community.

Meanwhile, the advent of the centennial Olympics 96 remains the catalysts that spread Africa Cultural Revolution, diversity, renaissance and reawakening to America.

The foundation was consolidated largely because of initiatives that began and flourished in conjunction with the 1996 Centennial Olympics in Atlanta, most notable, the Africa-Atlanta Project. The award therefore signifies and recognizes the AHF’s role in advancing culture and opportunity, with sports as a medium.

In his acceptance speech shortly after receiving the award on behalf of the foundation, Ambassador Adetunji observed that sports and culture are inseparable, adding that receiving the distinguished USSA encourages the foundation’s name to sit alongside other prolific achievers, sports celebrities, philanthropists, sports administrators and legends.

“The AHF celebrates its sincerity and excellence in the pursuit of developing the potential of individuals, and providing a platform upon which academia, sports and development can stand tall. It is my vision to see the natural talents in athletes honoured and cultivated. We must develop the talents and life ambitions of our youth, and provide a pathway for them to achieve international recognition for their hard work”, he further stated.

He also maintained that it is the foundation’s honour and duty to represent and promote the continent of Africa and her many peoples, adding that the recent accomplishment (USSA) is another achievement for Africa’s people, and the Diaspora, to be proud of.

“In light of the myriad of achievements the AHF is pursuing the momentum tirelessly, spreading its works and lectures in capacity building, and cultivating human resources by way of invitation in the university systems of China, Brazil, and the Caribbean. These proceedings and dialogues are held with the ultimate objective of establishing new universities and centers. Advocating the alteration of ‘brain drain into brain gain’, the AHF is taking the battle for cultural development even as far as Australia”, he stressed.

“In celebrating these great achievements for Africa, it was the foundation’s honour to aid in the facilitation of the World Cup’s presence in South Africa. Because of an achievement as momentous and recent as the hosting of the World Cup in Johannesburg, the AHF’s vision for Olympic presence as soon as 2024 or 2028 is too earnest to be ambitious”, he further explained.

The hosting of the FIFA World Cup in South Africa, he added, has brought tremendous growth and progress to South Africa and its sub-region has been noted by the global community in many frontiers, noting that Africa is one of the premier emerging markets of the world, showing consistent economic growth, even in the midst of the global recession of recent years, according to the International Monetary Fund’s statistics.

Ambassador Adetunji, further assured that his intention is to honour Olympian medalists in the spirit of leadership, unity and cooperation by hosting both a parade and creating a designated Hall of Fame for outstanding athletes in the 6th region of the African Union and the Diaspora with a view to continuing the crusade of ‘bridging the gap and building the bridge’. He also disclosed that he has secured invitation to California, Brazil and Australia to mount the most internationally present campaign yet in the Africa Horizon movement.